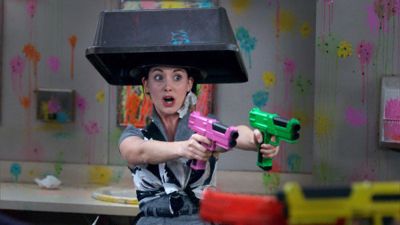 I loved watching Community back in the day. On its surface, it was a show about a study group at a community college, but it delves into some really zany (and very funny) territory. If you’re familiar with Rick and Morty, it was created by the same guy.

I’ve rewatched Community in syndication, but some of the best episodes are missing. So when I recently realized that it’s on Hulu, I decided to create (and rewatch) my 10 favorite episodes. Here they are in chronological order. If you’ve never seen Community, I would highly recommend watching at least these episodes. It’s 308 minutes of superb television.

I’ll keep my comments brief, as I don’t want to spoil anything. I also cheat a bit by combining linked episodes.

I’ve only seen season 6 once, but I don’t remember much about it. What’s your favorite episode in that season? It looks like episode 11 was another paintball episode–I need to rewatch it. Am I missing any episodes you love?

7 Responses to “10 Must-Watch Episodes of Community”