What Is the Best Drive-Thru? 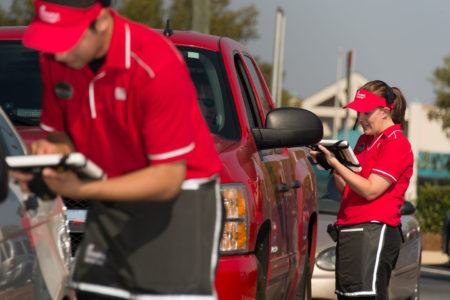 Today I was driving back home after an appointment. It was around lunchtime, and I wanted to grab a quick bite to eat, but I couldn’t figure out where.

That’s when I remembered that I was driving right past a Chick-Fil-A. While I struggle with some of the politics of the people who run Chick-Fil-A, they also seem to treat their employees well, and their food is pretty good.

All of that was fine and dandy. But the real reason I decided to go to Chick-Fil-A is that their drive-thru service is absolutely incredible.

I didn’t realize this was a thing until a few months ago when a friend insisted we go there for lunch. I briefly protested, as I thought the line would be too long. Heck, I’ve been in drive-thrus where the line isn’t long, and it still takes a long time.

But she insisted, and it was one of the best customer service experiences I’ve ever had. There was a whole team of people outside with headphones and POS gadgets. I had brief interactions with FIVE people: One to tell me which line to drive into, two to take my order, three to confirm my name, four to say hi, and five to deliver my food. My car was moving almost the entire time, and the entire process took 2 minutes, max.

Today, part of the reason I went was to simply marvel at the efficiency. But part of it was that I was 100% certain that I would move quickly through a process that could take much longer someplace else.

What the best drive-thru experience you’ve ever had?

This entry was posted on Tuesday, October 2nd, 2018 at 9:07 pm and is filed under food. You can follow any responses to this entry through the RSS 2.0 feed.

2 Responses to “What Is the Best Drive-Thru?”