What Do Animals Say in Your Language? 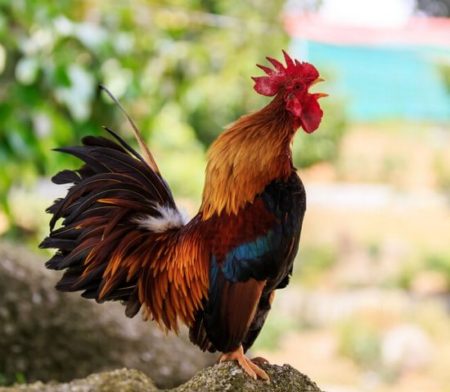 This random topic came up the other day.

I’m not sure why I thought of it, but I remembered from my days in Japan that onomatopoeia varies for different languages. There’s a ton of it in Japanese–like, the word for the sound that rain makes, the wind blowing, etc.

My favorites were the animal sounds, because it’s not like animals speak different languages. Cats in Japan meow just like cats in the US, and dogs woof just like here too.

But in Japan, the onomatopoeia for a cat’s meow is “nyaa nyaa.” I can kind of see that–Biddy and Walter have made sounds similar to nyaa. Meanwhile, dogs in Japanese say “wan wan.” I’m not sure I’ve ever heard a dog make that sound.

Looking at this list, I remembered one other favorite–I actually think the Japanese version is better than the English version. In Japanese, rooster’s don’t say “cock-a-doodle-doo”. Instead, they say “kokekokko!” I love that word.

What do cats, dogs, and roosters say in your language? I’m particularly curious about other versions of English, like UK, Australia, and South Africa (or are all English animal sounds the same no matter the region)?

This entry was posted on Wednesday, November 14th, 2018 at 10:18 pm and is filed under Uncategorized. You can follow any responses to this entry through the RSS 2.0 feed.

7 Responses to “What Do Animals Say in Your Language?”