A Special Visit to The Magic Castle 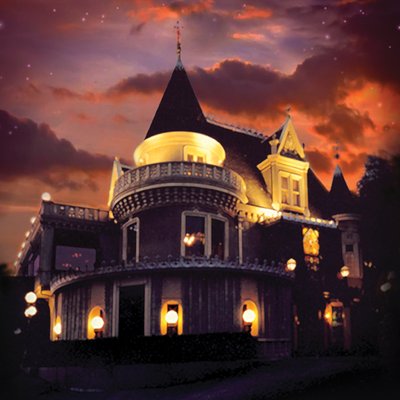 There’s one aspect of my Los Angeles trip for which I have no photos, and that’s because photos aren’t allowed at The Magic Castle. However, that won’t stop the experience from being burned in my memory as an amazing night to remember.

When I requested LA recommendations on Facebook a few weeks ago, I got an unexpected response from Peter Sciretta. I’ve met Peter once at Gen Con, but I’ve been a fan of his work for years–he runs the superb movie/entertainment website Slashfilm.

Peter is also a magician and a member of The Magic Castle (more on that in a second), and he offered to host me there during my trip. I’m not a magician, but I enjoy magic (I think I’ve written about my love for Fool Us, and The Prestige is one of my favorite movies), and I knew it would be a special experience.

You see, The Magic Castle is a private club for magicians and their guests. The only ways you can get into it are (a) if you’re a member, (b) if you’re a guest of a member, or (c) if a member gives you a special card to attend. So it manages to feel exclusive while also being inclusive, which I thought was interesting.

So my old friend Bryce and I met Peter and his friend, Jeff, around dinner time last Tuesday. We were dressed in full suits, as the Castle has a strict dress code. This made travel a little difficult, but it was absolutely worth it. I love the idea–it’s hard to explain, but dressing up and being around hundreds of other people who dressed up seemed to make the experience all the more special.

The place was packed. I didn’t know what to expect here–this was a Tuesday night, after all–but there were hundreds of people there. So many beautiful women in their evening best, and everyone seemed to buy into the experience. I think magic requires that type of buy-in. If you’re not into it, you can detract from everyone’s experience, but that wasn’t the case here.

The night was a flurry of activity, with Peter steering us around to different acts. Magic is happening everywhere at the Castle at all times. There’s a big show each night, but the highlights seem to be the smaller, more intimate shows–maybe 15-20 people total.

We saw some great tricks, including one where a magician put a metal rod through a steel block and another where a magician simply directed an audience member through a difficult trick without ever touching the cards. My favorite, though, was a trick Peter did that resulted in the face-up cards depicting my phone number. I didn’t see it at first, and when I realized it, I was stunned. Well played, Peter.

I mentioned that there’s a no-photo rule, and the reason, I learned, is that celebrities who attend the Castle don’t want to disrupt the flow by people asking to take photos with them. I only spotted one celebrity, Haley Joel Osment (a grown-up version of the kid in The Sixth Sense), who was in this room with me and 20 other people for a set: 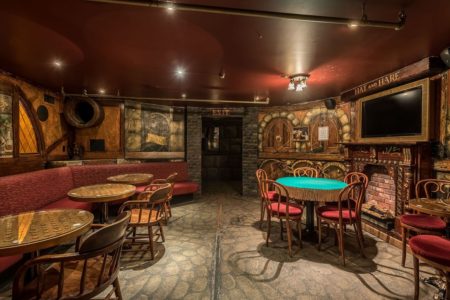 I have to say, it was awesome to have Peter is a guide at the Castle, and if you get the chance to go, I’d highly recommend going with a member (not just getting their card). Peter knew exactly where to go at all the right times, and his enthusiasm was contagious.

As a testament to how excited I was for the experience, we didn’t even eat dinner until around 10:00 pm (which was midnight St. Louis time). I’m very rigid about eating at regular times each day (7:30 am, noon, and 6:00 pm), but even food took a backseat to magic on this night.

When we did finally eat, though, the food was excellent. And that led me to my final highlight of the evening: Peppering Peter with questions about things he’s seen in the film industry. He’s been behind the scenes and in private interviews on thousands of movie sets. He told some amazing stories about a Steven Spielberg film and a Natalie Portman film, among others. It’s really neat that Peter doesn’t flaunt his experiences and insider access–he’s extremely humble about it.

Going to The Magic Castle was truly incredible, and I’m so grateful to Peter for the experience (Jeff and Bryce were great too). I hope you get the chance to go if you’re ever in LA. If you’ve already been, what did you think?

This entry was posted on Thursday, December 27th, 2018 at 9:41 pm and is filed under travel and tagged with movies, travel. You can follow any responses to this entry through the RSS 2.0 feed.

10 Responses to “A Special Visit to The Magic Castle”

Leave a Reply to Dallas Petersen