The Burning Question: Did Patrick Pee on the Couch? 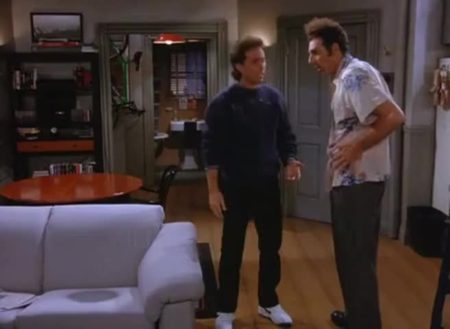 My condo is in a building with a bunch of other condos and apartments. The soundproofing is pretty good…but sometimes I hear things. Neighbor things.

This was the case on Saturday night when the sound of someone pounding on a distant door woke me up. My cats heard it too–they were on high alert.

Accompanying the pounding was a woman’s voice in a yell-whisper saying, “Patrick! Patrick, come here! Patrick!”

The first thought that crossed my mind was that a dog or cat named Patrick had escaped from his owner’s apartment. The owner didn’t want to come get Patrick because maybe she wasn’t fully dressed? That should have made me curious, but I was concerned about a random animal running into my apartment if I opened the door to help.

So I lay there listening as the pounding and yell-whispering continued. What was up with the pounding? That didn’t fit with the pet theory. I thought maybe someone was locked outside of my building–that would explain the distant sound. But not the words.

Eventually I went to the door, where I could clearly hear that someone down the hall was pounding on a door they could not open. So I resolved to help this person. I pulled on some pants, opened my door…and found no one. I was too late.

But not too late to hear the shouting.

Now, I should say here that it may seem odd to you that I’m sharing this. It’s none of my business. But all the commotion was loud enough to wake me up, and I could hear everything from my front door. I only listened for a minute, and then I went back to bed.

Plus, there’s a bit of a mystery here, and I’m curious about your thoughts.

I couldn’t hear Patrick at all, but I could definitely hear the woman, who was very frustrated. She was threatening to break up with Patrick, but she also seemed exhausted, as she didn’t want to discuss anything.

Here’s the really interesting part: She specifically told Patrick that he needed to sleep on the couch, but that “he better not pee on it.”

This revelation solidified my theory. Feel free to theorize on your own, and then read the following:

My theory is that Patrick and the woman went out for drinks. Patrick got drunk, and the woman didn’t want to deal with him, so she sent him home in an Uber with the keys to her apartment. A few hours later, she returned home, but she couldn’t open the door, and Patrick was passed out. Hence the pounding and the repeated pleas for Patrick to “come here.” Also, my guess is that Patrick has a history of peeing in odd places when he gets drunk, perhaps even on the same couch the woman was trying to protect.

That’s my theory, but it could be anything. What’s your theory? Do you think Patrick ended up peeing on the couch?

This entry was posted on Monday, December 10th, 2018 at 7:21 pm and is filed under personal, question of the day. You can follow any responses to this entry through the RSS 2.0 feed.

6 Responses to “The Burning Question: Did Patrick Pee on the Couch?”