Who Knew That Bamboo Is so Comfortable? 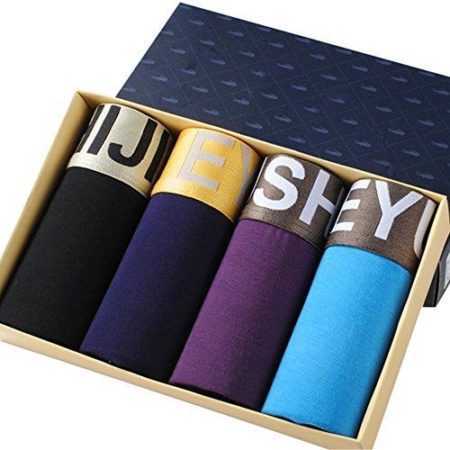 Over the last year, I’ve been on a quest to find the perfect pair of boxer briefs. Through a series of misfires, I think I’ve finally found the answer.

It started with this post: “What Is a Reasonable Price to Pay for Underwear?” My conclusion was that even though it’s hard to bite the bullet and pay $20+ for a single pair of boxer briefs, it’s worth it in the long run.

So I tried that method, testing out several brands. While I discovered some nice pairs of underwear, I also found that I was more forgiving of their flaws because I didn’t want to go through the hassle of returning them. I convinced myself that I had made a smart purchase.

But over time, I found that simply wasn’t true. They were fine, but not perfect. I wear boxer briefs every day; I want them to be perfect.

I didn’t want to keep spending money on them. The top-rated pairs were $35+, and even if they’re worth it, I just can’t see myself spending that much.

So when hope was almost lost, I discovered Eyushijia bamboo fiber boxer briefs. My friends, I’m here to tell you that they’re not only the most comfortable pair of underwear I’ve ever worn…they’re also only $4 a pair.

They’re so comfortable that I kind of want all of my clothing to be made from bamboo fiber. It’s incredibly soft, and it has just the right amount of stretch.

I feel like I got really lucky in finding these boxer briefs. If you’ve struggled with the same thing, I highly recommend them.

Do you have any bamboo fiber clothing?

This entry was posted on Monday, December 3rd, 2018 at 8:54 pm and is filed under Uncategorized. You can follow any responses to this entry through the RSS 2.0 feed.

3 Responses to “Who Knew That Bamboo Is so Comfortable?”