Have You Ever Had a Tarot Card Reading? 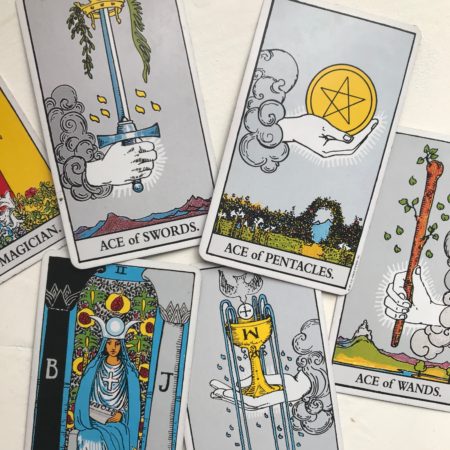 I don’t want someone else to tell me my future.

I learned this about myself at a recent party where a friend was performing tarot card readings. It’s an annual tradition for her to do this, and I could tell she enjoyed entertaining her friends with their possible futures. So I decided to join several people as my friend read their futures.

Now, I have to say that (a) I don’t follow horoscopes or astrological signs and (b) I believe that there are mysterious things about the universe that we don’t understand. So even though I don’t personally think that tarot cards mean anything, I also can’t pretend to understand the mysteries of the universe. As long as people aren’t hurting themselves or each other, I’m fine with people placing various levels of trust in tarot cards.

One friend had her year described to her, followed by another friend. While this was happening, it hit me rather hard that I really did not want my future read, even though I don’t believe that my future can be foretold via tarot cards.

I thought about this later, and here’s why: If someone describes my future, even if it’s not true, in the back of my mind I might wonder if it is true, and my actions might change as a result. Or, in the slim chance that it is possible to look into someone’s future, the act of you telling me my future means that I will live my life to ensure that the foretold future will come true.

I don’t want either of those things! I’d much rather find happiness in the present and strive for the future I want, not the future someone else tells me I’ll have.

I know, as did my friends, that it was all in good fun. But I was surprised by how much it meant to me to not know anything about my own future, whether it’s true or false. I want to discover it on my own.

How do you feel about fortune tellers, astrology, and tarot cards? Do you mind having your future read, even just for fun? Please respond in a non-judgmental way (unless you’re aware of these things doing significant damage to people, which I’m sure does happen with people pay a lot of money to con artists).

This entry was posted on Tuesday, January 8th, 2019 at 8:41 pm and is filed under personal and tagged with personal. You can follow any responses to this entry through the RSS 2.0 feed.

5 Responses to “Have You Ever Had a Tarot Card Reading?”