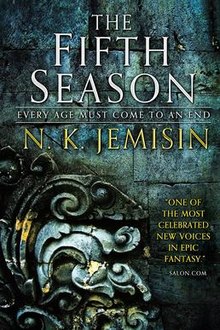 As I was looking at my list of blog entry ideas for tonight’s post, I noticed something I added on Saturday that makes no sense to me a mere 2 days later. The idea on the list was simply, “Broken Early,” capitalized as such. Normally I can decipher these notes, but I have no idea what I was talking about. And it’s not an autocorrect–I typed that on my computer. Was I referring to a broken ear? A Brooklyn yearly?

Oh! I got it! Broken Earth! It’s a new fantasy trilogy I recently started reading, and I wanted to recommend it. What a relief. I was going to lose sleep over that. 🙂

The original title of this post was, “Would you attend a stranger’s bachelor party?”, but now that makes no sense, so I’ll wait until tomorrow for that one.

The Broken Earth trilogy is written by N. K. Jemisin, and wonderfully enough, despite being fairly new, is 100% complete and published! I had heard great things about the first book, The Fifth Season, and the reviews on Amazon confirmed it (1,235 reviews, over 4.5-star average).

I love fantasy novels of all types, but I’m particularly drawn to modern fantasy in which the author creates their own world instead of putting their own twist on Tolkien. That’s very much the case here, as The Fifth Season takes place in a world where monumental tectonic shifts essentially result in the end of the world (or close to it) every few thousand years. The entire infrastructure of the world is designed around that premise.

In addition, there are some people in the world who are not only in tune with the tectonic plates, but they can exert some control over them and draw energy from sources of heat (like magma). It’s a fascinating magic system.

Also, the characters are fascinating and nuanced, and there’s a big overarching mystery that I’m just beginning to understand now that I’m reading the second book.

I’m loving the series. If you enjoy fantasy novels with unique worldbuilding and captivating characters, I highly recommend the Broken Earth trilogy, starting with The Fifth Season.

If you’ve read the series, what do you think? No spoilers, please. If not, what’s the best fantasy novel you’ve read recently that features a wholly unique world?

This entry was posted on Monday, February 4th, 2019 at 10:27 pm and is filed under books. You can follow any responses to this entry through the RSS 2.0 feed.

8 Responses to “This Was Almost a Completely Different Post”