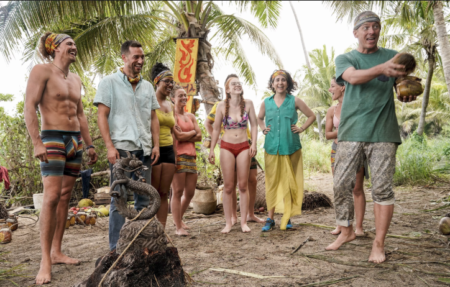 I finally watched the first two episodes of Survivor tonight, and I’m already riveted. I think it’s going to be a great season. The dynamic of having a few returning contestants mixed with mostly new folks (lots of interesting personalities and stories among them) will be fun to watch.

But the big twist–not a spoiler at all, as it was revealed before the season began and in the first minute of the premiere–has me super curious about what will happen. Here’s the deal:

Normally in Survivor, when you’re voted out, your game is over. You walk down a path, check in with the medical team, eat a good meal, then sleep in a real bed.

There have been exceptions to that rule, including the “redemption” seasons and the season where people who were voted out returned as a new team for a single challenge. So the twist this season isn’t all that drastic, just interesting.

When you’re voted out this season, you walk down the path, thinking that your game is over….but there’s a signpost waiting for you. It reads like a choose-your-own adventure book: You can either choose to end your Survivor journey OR continue to play in isolation with a chance of returning to the game. The sign makes it clear that the path of continuing will be filled with hardship and strife.

I love this twist, especially since it’s a complete surprise to the contestants. The show executes it as much drama as possible, ending each episode at slightly different times with different types of uncertainty. It made me glad that my group watches 2 episodes in a row so we can see what happens next after the first episode.

For the people who choose to stay in the game, we don’t know how long they’ll have to wait, how hard it will be for them to survive, and what they’ll have to do to get back into the game. I’m very curious to see how it plays out.

Also, I’m very curious to see which contestants choose to leave the game. My guess is that most will stay, but if some are really tired and hungry after being on the island for a few weeks, they may leave. Even though no one wants to get voted out, I’m sure there’s at least a small sense of relief when it happens.

What do you think about the twist? In which circumstances would you choose to leave the game instead of staying in it?

This entry was posted on Thursday, February 28th, 2019 at 10:03 pm and is filed under Survivor, television and tagged with television. You can follow any responses to this entry through the RSS 2.0 feed.

8 Responses to “Have You Watched Survivor: Edge of Extinction”