The Bachelor Finale: Creepy, Sweet, or Both?

My month-long journey of watching The Bachelor ended this week with a series of entertaining twists.

The show paints its conclusion as a modern fairy tale: Two people fall in love in a short period of time and walk off into the sunset, engaged and happy. To maximize the drama, the show wants the bachelor to bring two women into the finale and then choose one of them.

It’s a very odd format. When you got engaged, was there someone else nearby who you loved almost as much and had been dating your significant other at the same time? Probably not.

However, this season broke away from this regular format thanks to an interesting, persistent, stubborn, and potentially creepy decision made by Colton. When there were 3 women remaining, 1 of them (Cassie) broke up with Colton. Her stated reason was that she just didn’t think she would be ready for an engagement after such a short period of time, and she knew that’s what Colton wanted.

As it turned out, Colton only wanted Cassie. So he thought what he needed to do was break up with both of the other women (which he did) and then invite Cassie to join him again, taking things day by day. She accepted, and in the live finale they revealed that they’re not engaged, but still together.

I think a lot of these format-breaking decisions are good. However, an interesting article on Vox makes some great points about how it was irresponsible of The Bachelor to glorify “the chase.” For example, see this promotional tweet: 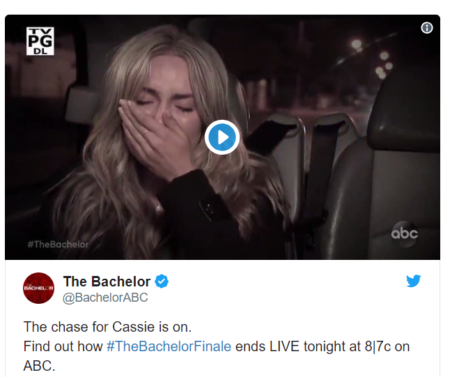 The clip is from after Cassie broke up with Colton. Even just looking at the still photo, do you think, “This is a great opportunity for whomever she broke up with to pursue her!” Of course not.

And it’s not just the show. Colton himself–who seems like a good, genuine guy, albeit someone who is in love with the idea of falling in love–says the following (paragraph courtesy of Vox):

“I wanted you to see how much I’m willing to give up and give to us,” he said to Randolph at one point, adding later, in a testimonial to the camera, “If things go well, Cassie could be in love with me by the end of next week.”

What? I don’t even know what to say to that, but I’m pretty sure it’s a terrible message about love for a show to share.

Despite the weird and unfortunate nature of the way The Bachelor treated “the chase,” my hope is that at some point offscreen after filming ended, Cassie took a good, hard look at how she really felt and proceeded to act accordingly.

What do you think about all this?

This entry was posted on Thursday, March 14th, 2019 at 10:14 pm and is filed under television and tagged with television. You can follow any responses to this entry through the RSS 2.0 feed.