How Much Tupperware Do You Own? 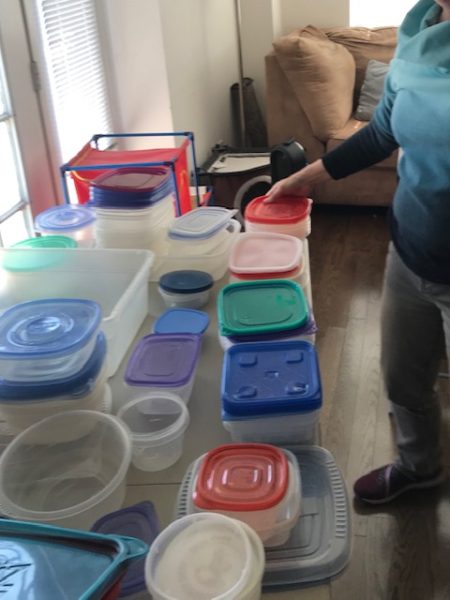 For the purposes of this article, I’m using the generic term “tupperware” to mean all plastic containers used for storing food even though the Tupperware brand is its own specific thing.

Until this weekend, I had a tupperware problem. Though even I didn’t know how bad it was.

My parents were in town for a brief visit, and we spent Sunday afternoon organizing and fixing up my condo. I mentioned to my mom that I had accumulated a bunch of tupperware that was currently jammed under my sink, and I asked if she could find a better solution for storing it.

Now, this is something I could have done without my mom, but it’s a lot easier to jam more tupperware under the sink than it is to fix the problem. And even if I had taken out all of my tupperware, I probably would have simply organized it once and put it all back under my sink.

She took out all of my tupperware (which was hiding in many more places than just under the sink), and she laid it all out on a folding table. That was the first revelation–I had no idea this much tupperware existed in my condo (there’s even more off camera).

She replied, “Great! We’re going to donate all but 9 containers/lids.”

Woah. I knew she was right, yet it hadn’t ever occurred to me that I shouldn’t keep all of the tupperware. Just because I have it doesn’t mean I actually need it, and if I don’t need it, I probably shouldn’t have it–I should give it to someone who can put it to use.

So that’s what we did. We selected around 9 containers (two sets of matching bases/lids), and I’m taking the rest to Goodwill. I did the same thing with glasses later in the afternoon. It felt amazing to rid myself of all that clutter I had accumulated over the years.

Have you ever purged tupperware, glasses, or something else that piled up in your house?

This entry was posted on Tuesday, April 2nd, 2019 at 9:43 pm and is filed under personal. You can follow any responses to this entry through the RSS 2.0 feed.

10 Responses to “How Much Tupperware Do You Own?”