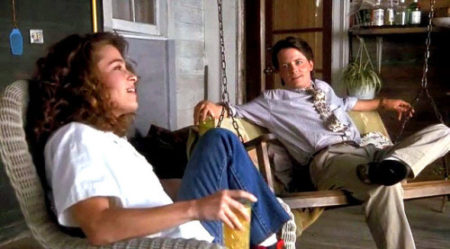 Have you watched the TV show Schitts Creek? A number of episodes are available on Netflix, so I watched through them a month or so ago. I really enjoyed it.

The premise of the show is that a very rich family gets scammed out of their money and is forced to move to a small town they didn’t even remember they owned. The entire show takes place in that town.

I realized while watching it that I am incredibly comforted by movies and TV shows about city folks getting stuck in small towns. There’s just something very pleasant about them, and I’m not sure why.

Some other examples of this are the movie Doc Hollywood, Groundhog Day, and Brockmire (season 1, at least). Can you think of some other examples? I enjoy those movies so much that I’ve watched them multiple times, and just writing about them now makes me want to watch them again.

I’m trying to figure out why I enjoy this premise so much. My hunch is that it’s something about watching a person realize what’s really important to them when their life becomes simplified. My other theory is that I like the folksy atmosphere of the way small towns are depicted in fictional media is.

I’ve visited some small towns, and I can’t say that Hollywood gets them completely wrong. But at the same time, I know there’s also a lot more depth to them (good and bad). If you’ve ever lived in a small town, what’s accurate and what’s not about their depiction in media?

Do you like this genre? Why or why not?

10 Responses to “Why Do I Like This Genre of Movie/TV So Much?”