I try to share a lot of love with my two cats, Biddy and Walter. Sometimes this comes in the form of tummy time, snuggle time, or balcony time (lots of “times”). Other times it’s more out of necessity–Biddy has diabetes, so I give him twice-daily shots of insulin and only eats wet food; Walter had a urinary blockage, so he now eats special prescription dry food. 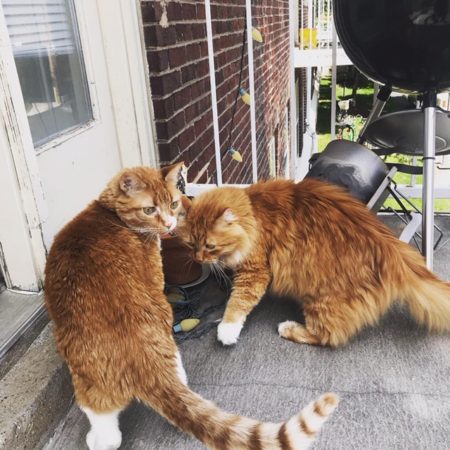 Despite their medical bills, in terms of toys, they’re very low-budget. Biddy likes boxes and rubber bands, while Walter prefers ribbons and belts.

So recently when I learned about Basepaws and Crown & Paw, two non-essential pet-related indulgences, I started to contemplate pursuing one of them. I thought I’d run the idea by you today to see which one you like more.

Basepaws is like “23 and Me,” but for pets. If I signed up for it ($95 per cat), I would send a tuft of cat hair to the service, and they would send me a report about their breed and health. While it’s not the sexier of the two options, I think it would be fascinating to learn this information, and I like that it’s not tangible–I don’t really need more things.

Crown & Paw is a digital pet-portrait service that incorporates your pet’s face into a distinguished, Renaissance-style painting for around $50. I think they’re hilarious, and they would fit well with my Scythe and Wingspan prints.

What do you think? Should I pursue either of these and write about it on the blog? Have you ever indulgence yourself as a pet owner with something like this?

This entry was posted on Tuesday, May 14th, 2019 at 10:01 pm and is filed under Uncategorized and tagged with cats. You can follow any responses to this entry through the RSS 2.0 feed.

Leave a Reply to TMac