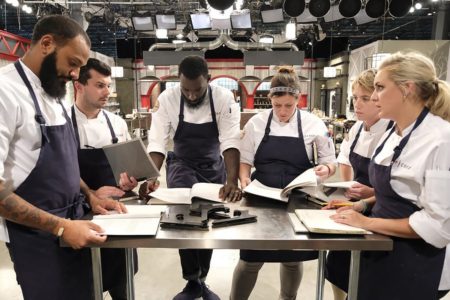 As entertaining as all of those shows are, they all have a few common elements that bug me. So I thought I’d try to improve upon the cooking show formula with a few tweaks.

This is by far my top gripe about cooking shows: As a critic is dissecting a chef’s hard work, I can’t help but think, “Could you really do any better?” It’s not an entirely valid question, as critiquing is a skill, just as cooking is a skill, but it degrades my trust in the process.

Sometimes the critics are chefs, but even then, they aren’t cooking in the competition. They get to go back to their restaurant and give commands to their sous chef. Even with them I wonder if they could do better given the circumstances.

My Solution: Get rid of the critics and let the contestants blindly judge each other’s dishes. This is the big twist, a cooking show where the contestants are the judges (kind of like Survivor, but anonymous). Each chef would cook simultaneously but in secret, and their dishes would be presented, tasted, and ranked in secret. Measures would be taken to prevent any amount of favoritism between contestants.

Issue #2: One Mistake and You’re Done

Top Chef has somewhat rectified this with Last Chance Kitchen, but the overall issue is that with all of these shows, the contestants are judged purely on their performance in each episode. So you might be the best chef all season, and if you mess up your red wine reduction in episode 10, you’re out. That makes no sense to me if you’re searching for the best chef.

My Solution: Make scores cumulative and don’t eliminate contestants, rewarding players with cash prizes based on points at the end of the season (as well as having a clear winner). Sure, you’ll have some contestants who race ahead and others who fall behind, but they’re all competing for a payout, and the producers could still throw in little challenges as needed to ensure some level of parity.

Issue #3: Too Many Random Dishes

This is just a minor issue, and sometimes it’s not an issue at all. It’s fun to watch chefs cook with unfamiliar ingredients and restraints. At the same time, though, sometimes I just want to see them make something they’re really good at–I think sometimes producers forget that we’ve never seen these people in their element before, and it’s fun to watch someone do what they do best. No one forces Usain Bolt to swim 5 laps–we want to watch him run!

My Solution: Make the majority of challenges about small twists to dishes selected by the contestants. For example, make any appetizer, but it must be at least 8 inches tall (or be blue or use a weird ingredient).

This is just my opinion, of course. What are some of your pet peeves about cooking shows, and how would you fix them? Would you be interested in a cooking show featuring any of these ideas? What’s your favorite cooking show and why?

This entry was posted on Monday, May 6th, 2019 at 9:58 pm and is filed under television and tagged with cooking, television. You can follow any responses to this entry through the RSS 2.0 feed.

6 Responses to “How Would You Design a Cooking Show?”