Have You Ever Had a Plumbing Disaster? 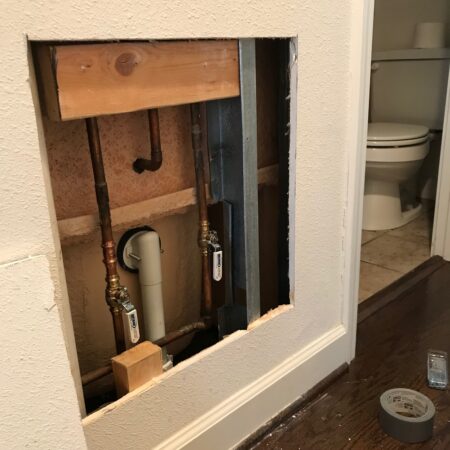 For at least the last 5 years, probably longer, the shower in my second bathroom hasn’t worked. It’s such a small thing–the cartridge behind the handle came loose, making it impossible to make the water hot. So, technically the shower functioned, but most people don’t want to take cold showers.

Why, you might ask, haven’t I fixed it? Well, like all other condos in my building, my unit doesn’t have a shutoff valve. So if you want to fix a plumbing issue, you need to shut off water to the entire 8-story building, which my condo association really does not like to do.

But recently I learned about another option: A plumber can temporarily freeze a pipe, fix the problem, and it’ll work like a charm when the pipe thaws.

At least, that’s how it’s supposed to work.

It took me a while to find a plumber who would do it, and even they were hesitant. But Chad from Hoffmann showed up early this morning to give it a try.

For the first hour, everything went perfectly. He set up a bunch of equipment, cut a hole in my drywall in the exact right place, and spent 20 minutes freezing the pipe (more than enough time). I was in a nearby room working.

Even for the first minute after he cut into the pipe, it was fine. Then I heard it: A squirt, a hiss, and a terrified, “Help!”

I darted into the hallway to see WATER SHOOTING EVERYWHERE. Chad is hanging on for dear life, trying to keep his thumb on the pipe. I’m watching in slow motion as water soaks the wall, then the ceiling, then the living room.

And you know what my courageous, heroic instinct was in that split second as the water seemed to rotate towards me? I thought, “I’d better close the office door so I don’t get wet too.”

Fortunately I saw the panicked look on Chad face as I made a move towards the door, and instead I shouted, “Do I need to make the call?” “The call” was a pre-arranged backup plan to call the condo association, tell them everything had gone to hell, and finally get permission to turn off the water.

It was then that Chad–yes, I tipped him well after this ordeal–somehow managed against all odds to tighten the shutoff valve in place. Instantly the flooding stopped.

This ended up being really great, because the backup plan was poorly conceived from the start. As it turned out, we still did need to shut off the water to the building, and it took about 45 minutes to flush out all of the water currently in the pipes. By then my entire condo would have flooded and my cats would have deserted me for higher ground.

So that’s how close I came to a plumbing catastrophe today. Crisis averted, but just barely.

Have you ever had any close calls like this, plumbing or otherwise?

This entry was posted on Tuesday, August 13th, 2019 at 8:13 pm and is filed under Uncategorized. You can follow any responses to this entry through the RSS 2.0 feed.

14 Responses to “Have You Ever Had a Plumbing Disaster?”