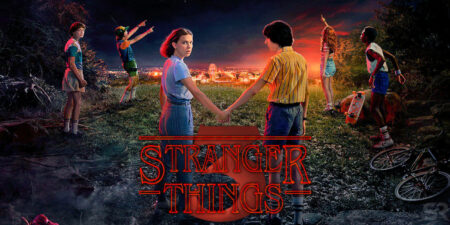 A few days ago If finished watching the eighth and final episode of Stranger Things season 3, and I thought I’d share my thoughts here. Some spoilers will likely follow.

Overall, I thought season 3 was a return to form after some missteps in season 2. It returned to many of the familiar beats of season 1: mysterious government agency, kid with special abilities, other kids solving mysteries, scary monsters, and a touch of romance/bromance.

It also added some new twists to keep things fresh, like body snatching, a Terminator-like character, and a better balance of male and female characters.

I enjoyed the humor throughout the season. I really liked that the kids mostly spent their time having fun with each other (though there were still some scenes of bickering and fighting). And I thought it was very clever to continue to return to the mall for both small and big scenes–it was nice to have a familiar home base to anchor the season.

I’ve been trying to put my finger on why season 3 didn’t seem as good as season 1, especially given that the production value is significantly better now. I think I’ve figured it out: Much of the information was revealed this season in such a way that the audience knew too much before the investigating characters did. It doesn’t mean that information was any less interesting than what we learned about in the first season; it just meant that I wasn’t on the edge of my seat in real time with the characters because I already knew what they were going to discover.

But that’s just me. What about you? What were the things you liked most and least about season 3?

This entry was posted on Thursday, August 1st, 2019 at 6:43 pm and is filed under television and tagged with television. You can follow any responses to this entry through the RSS 2.0 feed.

One Response to “What Did You Think About Stranger Things Season 3?”