Have You Ever Loved a Local Product So Much You Want to Invest in It? 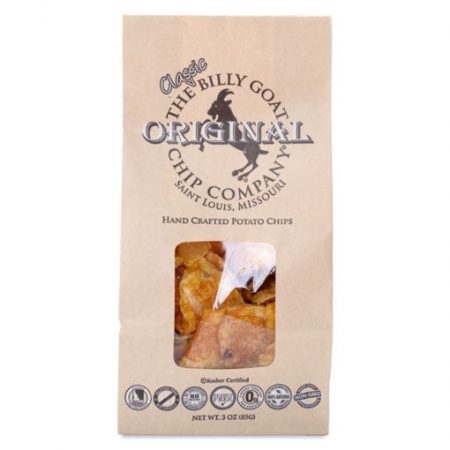 Unless you’ve eaten a Billy Goat chip, you won’t know what I’m talking about. But nearly everyone I’ve ever introduced them to has been unable to stop eating them. I haven’t been interested in any other potato chip since discovering Billy Goat years ago.

The reason they’re so good, in my opinion, is twofold:

Billy Goat is a St. Louis company. I’ve been to their office once (to buy the spice shaker). And oddly enough, for reasons I can’t fully explain, for several years now I’ve thought about seeing if they’re open to investments.

I think part of the reason is that I like the chips so much that I want to ensure they continue to exist. I also like sharing them with others–it feels good to share something that people respond so well to. There’s a pride in that, even without a financial investment. Also, at least from the outside looking in, I think it could be a good investment.

So why haven’t I informed Billy Goat of my interest? After all, I know from people proposing investments to Stonemaier Games that it’s flattering to hear when a stranger believes in you so much that they’d consider an investment.

I think my reasons are (a) I’m not rich, and a lot of the money I have is in a retirement account, (b) it feels weird to appear out of nowhere and say I want to invest, (c) I’ve never done something like this before and don’t know if it’s a good idea, (d) while I know the product, I don’t know the people, and (e) my number one priority is to Stonemaier Games, so any investment that distracts me from my company doesn’t seem prudent.

Despite all this, it’s still fun to think about the possibility. I’m curious if you’ve ever thought about something like this or actually done something about it. If so, how did you approach the company as a stranger?

Also, if you want to see how good these chips are, Whole Foods has them (both in their store and on Amazon). Of course, if you live in St. Louis, you can find them everywhere.

This entry was posted on Monday, September 30th, 2019 at 7:51 pm and is filed under food. You can follow any responses to this entry through the RSS 2.0 feed.

2 Responses to “Have You Ever Loved a Local Product So Much You Want to Invest in It?”