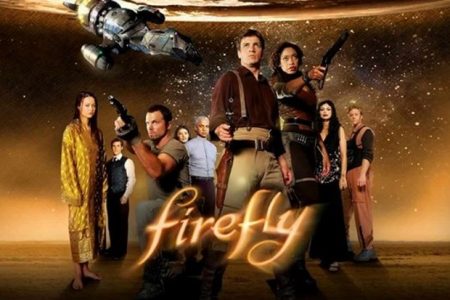 Joining the list of “shows I should have watched at least 10 years ago” is Firefly, and I’m here to talk about it as if it’s brand new!

Megan is a huge fan of Firefly. After learning that I’d never seen it (aside from the movie, Serenity, which I somehow have seen), she shared the DVD set with me, and we’ve been watching the first and only season. We’re around halfway through.

It’s somewhat bittersweet to watch the show, as I’m loving it, yet I know it was cut short. There’s only 1 season (15 episodes). I already want more, yet I must admit that if the show had run through a full 5-season arc, I might be much less likely to jump into it at this point.

The brilliance of the show, in my opinion, is how it’s a cowboy show set 500 years in the future. It features a ragtag band of likable outlaws who travel from town to town, getting into trouble and avoiding the law (and worse). It’s a familiar concept.

Yet these towns are on different planets. The characters travel by spaceship. They…well, actually, those are the main futuristic elements. Everything else is almost identical to a Western, even the guns, costumes, and music. It’s a carefully crafted balance, and it somehow manages to work, as the towns are on terraformed planets where settlers were dropped off with limited supplies and technology.

Have you watched Firefly? If not, has there ever been an older show that you discovered and are glad you did?

This entry was posted on Sunday, September 29th, 2019 at 7:11 pm and is filed under television and tagged with television. You can follow any responses to this entry through the RSS 2.0 feed.

9 Responses to “Have You Watched Firefly?”