Do You Pirate Movies That Are Currently in the Theater? 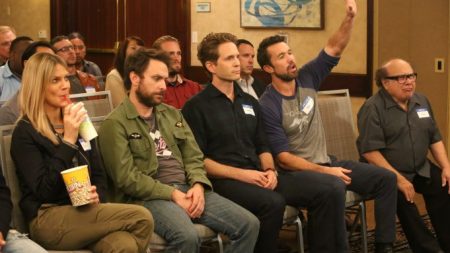 I just watched the second episode of It’s Always Sunny in Philadelphia (great season so far), and I learned something that really caught me off guard, something I’d like to verify with you.

Basically, in the episode, the gang are participating in a focus group for a new movie. They’re disappointed to learn that the movie is rated PG-13 instead of R, and they’re told that the reason the studio went with a softer rating is because R-rated movies are more likely to be pirated. The gang begrudgingly admits that they’ve downloaded plenty of movies instead of going to the theater.

Now, this is a TV show, so I’m not sure how much truth is on display. That’s why I’m asking you: Do you download and watch movies that are currently in the theater? Is it widespread?

I’m completely baffled by this concept. Now, I will admit that when I was in college, Napster was in its heyday, and I watched plenty of old movies and Simpsons episodes on my computer. I don’t feel great about it in hindsight, but I did it.

Ever since then, though, I’ve been completely clean about how I get my TV shows and movies. It’s not complicated, really: I either pay for them in the theater, I pay for cable to bring the shows to me, and I pay for streaming/premium services like Netflix and HBO. It hasn’t even occurred to me since college to illegally download a movie instead of going to the theater.

But maybe I’m in the minority here–you tell me! And just to be clear, I’m trying not to be high-minded about this. I’m just looking to understand what other humans are doing in 2019.

This entry was posted on Sunday, October 6th, 2019 at 7:27 pm and is filed under movies and tagged with movies. You can follow any responses to this entry through the RSS 2.0 feed.

4 Responses to “Do You Pirate Movies That Are Currently in the Theater?”