Would You Ever Let Someone Else Pack Your Home for a Move?

This week I did something I haven’t done in over 14 years: I moved.

That’s right, I bought my condo when I was 24, and now at 38 I have a new place with my girlfriend, a place I hope we call home for a long time.

One of the big reasons I lived in the same place for so long–as odd of a reason as it is–is that I strongly dislike the idea of moving. It’s the epitome of monotony and repetition to me. All of my stuff is already in Place A–why would I take the time to pack it all up, drive it to Place B, unpack it, and put it back pretty much the same way?

For this reason, I decided to indulge a little bit and hire the type of movers who pack up all your stuff for you and then move it for you to the new place. I thought that would make the move more palatable.

So, long story short, that’s what I did. BEK Movers were recommended to me, and I think they did a great job. Two guys showed up at my condo on Monday with a stack of boxes to find all of my things removed from cabinets and closets. I had spent the last few days prepping my place and moving certain items that I didn’t think would pack well.

They took just over 2 hours to pack everything. I stayed busy during that time, loading more fragile items into my car. They used several different box sizes, and they wrapped some of my portable cabinets in moving shrink wrap so I wouldn’t have to remove everything from the drawers just to put it back in. They were also very careful–almost too careful–with all of the dishes and glasses, wrapping each one in paper.

Then a different team of 3 people from the same company arrived the next day to move all of my stuff (and making a detour to my girlfriend’s place to pick up her stuff) before unloading it into our new condo. I helped the entire time too. As grueling as it was, I justified it by telling myself repeatedly that it was good exercise and I was saving myself money on their hourly rate.

I’ll share some photos of our new place next week; for now, here are photos from the packing day: 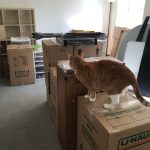 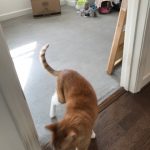 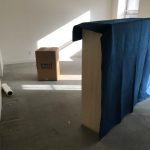 Have you ever used this method of moving? If not, would you? In my opinion, it was very much worth the expense.

This entry was posted on Thursday, October 10th, 2019 at 6:56 pm and is filed under personal and tagged with personal. You can follow any responses to this entry through the RSS 2.0 feed.

10 Responses to “Would You Ever Let Someone Else Pack Your Home for a Move?”