Amtrak vs Flying: Which Do You Prefer? 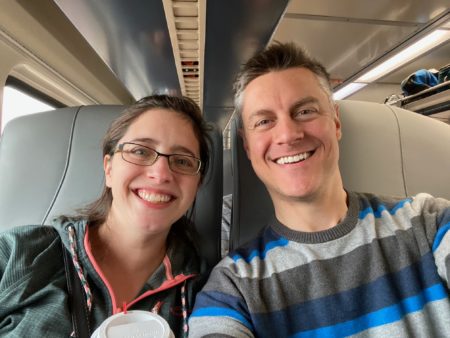 For the first time in many years, I took an Amtrak train instead of flying (or driving), and I have a few thoughts to share.

Megan and I were going to Chicago for Thanksgiving, and driving in potentially bad weather just didn’t seem like a great idea, nor did flying over the holidays. So we booked a few seats on Amtrak for half the cost of a single plane ticket.

We arrived at the train station 30 minutes before departure. We started boarding almost immediately, with Amtrak staff guiding couples and families into one car so they could sit next to each other and singles onto other cars (a nice touch, in my opinion, as there were no assigned seats).

A few minutes later, we were on our way to Chicago. A conductor stopped by to check our tickets, after which we moved to different seats due to a really noisy family nearby. Our seats were large, comfy, and there was plenty of leg room. Drinks weren’t served like on an airplane, but it was really easy to bring snacks and drinks on board, and there was a dining car if you wanted more.

The entire train ride was just over 5 hours, including a few unexpected stops and the boarding time.

As you can tell, there’s a lot here that compares favorably to a trip to the airport. Flying itself–the time you’re in the air compared to the distance you travel–is way more efficient. But when I fly, the process of arriving and going through security is extremely inefficient and time-consuming. Plus, I actually felt like I was treated as a human being by Amtrak. I appreciate everything TSA does to keep us safe, but I don’t walk out of an airport security line feeling good.

There are many places I want to travel for which Amtrak isn’t a good fit. But for those places that are, I’m definitely going to take the train in the future.

What has been your experience with taking the train versus flying?

This entry was posted on Sunday, December 1st, 2019 at 9:26 pm and is filed under travel and tagged with travel. You can follow any responses to this entry through the RSS 2.0 feed.

8 Responses to “Amtrak vs Flying: Which Do You Prefer?”