I read a total of 17 novels in 2019, and I loved almost all of them. Most were continuations of series I was already enjoying, though a few were new to me.

I have a top 4 list, but leading up to it are some amazing books, all of which I’d highly recommend: Rosewater, The Fifth Season, King of Scars, Tiamat’s Wrath, Children of Ruin, Jade War, Dark Age, and Starsight.

4. The Poppy War by R.F. Kuang: This first book of a new series swept me away from the start. While the premise is somewhat familiar (orphan kid goes to magic school), it rather quickly becomes so much more than that. I have the second book waiting on my Kindle.

3. Jade City by Fonda Lee: “Magic plus mafia plus kung fu? These books were written for me!” That was my reaction after immersing myself in this amazing series. I think there’s just one more book in the series, and I can’t wait to see how it ends.

2. The Obelisk Gate by N.K. Jemisin: “I’m particularly drawn to modern fantasy in which the author creates their own world instead of putting their own twist on Tolkien. That’s very much the case here, as The Fifth Season takes place in a world where monumental tectonic shifts essentially result in the end of the world (or close to it) every few thousand years. The entire infrastructure of the world is designed around that premise.” As I wrote here, I loved this series, and The Obelisk Gate was my favorite from it.

1. Six of Crows/Crooked Kingdom duology by Leigh Bardugo: Bardugo has become one of my favorite authors. I love her short stories, I love her novels, and I love that she broke from the fairly standard trilogy format to tell a complete story in two books (each of which stands well by itself and feels unique compared to the other). It’s a heist book in a familiar but slightly magical world. I think it’s going to be a Netflix series soon, which perhaps is a testament to the quality of the books. 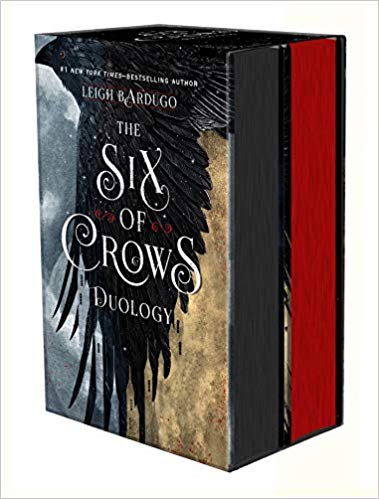 What are a few of your favorite books you read in 2019?

This entry was posted on Monday, December 23rd, 2019 at 6:23 pm and is filed under books, favorites and tagged with books, favorites. You can follow any responses to this entry through the RSS 2.0 feed.