Do You Think the Super Bowl Halftime Show Was Kid Friendly? 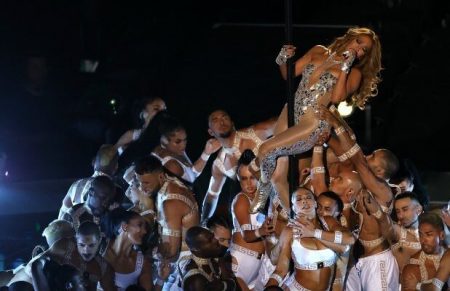 I don’t have kids of my own. I have nieces and nephews that I deeply care about, but when I’m not around them, it’s rare that I consider the kid-friendliness of pretty much anything.

I was at a party last night with 7 adults and 6 kids. Other than an infant, the kids were all little girls, ages ranging from 2 to 6. They ignored the game and the commercials, but when Shakira and Jennifer Lopez took the stage, they were entranced.

On the surface, I enjoyed the halftime show. Shakira and Lopez are incredibly talented performers, and their songs are catchy. In some ways, it felt like a celebration of Latino culture, which was awesome to see on such a big stage.

But there was a 5-10 minute portion of the show that felt…well, honestly, it felt a lot more like a scene from a sex club (as shown in movies–I’m not sure if they exist in real life) than a musical performance. Lopez was twirling on a pole with a mass of writhing bodies around her. With several little girls intently watching, I couldn’t help but wonder if the choreographers considered that little kids would be watching this performance, as it did not seem kid friendly to me at all.

I’m trying to choose my words carefully here, but I don’t think there was anything inherently wrong about Lopez’ performance (Shakira was great too, but she wasn’t really involved in the portion of the show I’m talking about). She was there to entertain.

Actually, let me rephrase that. Lopez was there to entertain adults. If she were invited to perform at an elementary school, there’s absolutely no way she would choose that performance.

Granted, little kids aren’t the target audience for the Super Bowl. Most 4-year-olds aren’t deeply entrenched in Chiefs or Niners fandom, nor are they the ones buying anything in the commercials. Also, there are hundreds of other TV channels–any parent could simply change the channel if the halftime show becomes inappropriate for small children.

Maybe that’s the answer. Or maybe I’m wrong, and the show was perfectly kid-friendly. Or maybe there’s another answer. It was just surreal for me to watch little girls watching that portion of the performance, and I can’t imagine they were the only little kids watching it last night.

What do you think? I’m particularly curious about your reaction if you have kids.

This entry was posted on Monday, February 3rd, 2020 at 8:36 pm and is filed under Uncategorized. You can follow any responses to this entry through the RSS 2.0 feed.

9 Responses to “Do You Think the Super Bowl Halftime Show Was Kid Friendly?”