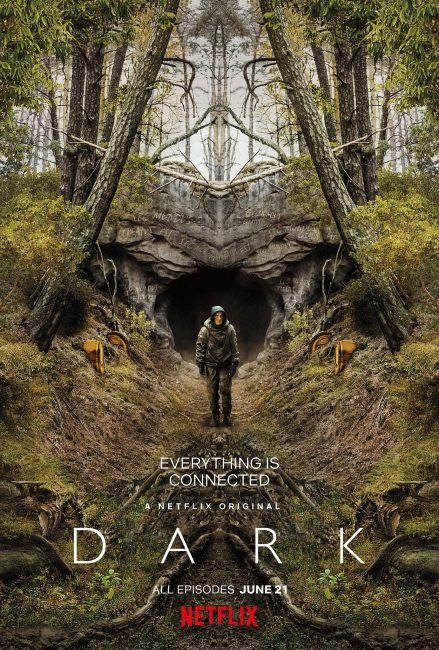 Our “heavy” show for the last month has been a German show called Dark that made it’s debut on Netlix a year or so ago (there are now 2 seasons available). I saved it when I originally heard about it, but it seemed too, well, dark for my tastes, so I had forgotten about it.

I’m glad I finally gave it a try, though, as it delves into one of my favorite genres in a unique way. I’ll be talking about some general concepts today–things that are revealed in the first few episodes–so if you haven’t watched it and don’t want to know anything about it, maybe watch an episode or two before reading this.

Dark is about time loops and time travel, with the highlight being that several time periods are linked to each other, but time is always moving forward in all of them. So, if you’re in 1985 on October 1 and you jump forward in time, you’ll jump to October 1, 2018. If you spend a day in 2018 and jump back, you’ll find yourself on October 2, 1985.

This creates a lot of interesting scenarios, and it removes many of the problems from time travel fiction (a recent episode of Rick and Morty exposes many of those issues). We quickly realized that every person in the show has a mystery, and rarely is it the typical “character keeping a secret” mystery you see in shows like this. Rather, characters are learning about themselves at the same time we’re learning about them.

Is the show as dark as the name suggests? I was a little worried about that after the first episode, which even includes a jump scare. But it’s not a horror show at all. It’s serious science fiction. I’ve described it to people as a “German Stranger Things.”

I have one small complaint about the show–and a point of excitement–that is more spoilery than what I’ve written so far. Basically, there are a few times in the show when you realize that nothing the characters do can change anything. This is particularly evident when a character time travels and tries to change something, only for them (and us) to realize that they’re creating the problem they’re trying to solve. This is interesting the first and second time…but by the tenth time it happens, it’s just exasperating. So I’m excited by the twist introduced at the very end of the season 2 finale.

Have you watched Dark? What did you think of its unique take on time travel?

This entry was posted on Tuesday, February 18th, 2020 at 5:35 pm and is filed under television and tagged with television. You can follow any responses to this entry through the RSS 2.0 feed.