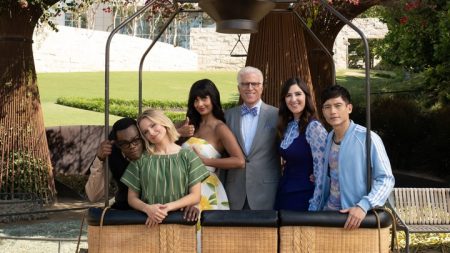 As Megan and I sat down to watch the finale of The Good Place, I positioned a box of tissues where we could both reach it. Given the tone of this season, our attachment to the characters, and the wholesome nature of the show, I just had a feeling we might be needing them.

I was right. Though it didn’t wreck us, as it did what The Good Place does so well: It mixed humor, philosophy, playfulness, and heart into a nearly perfect show (for me). And the entire time, it was somehow a show about the afterlife without being offensive to any specific religion or religions as a whole.

I’m not sure if this was the intention, but I like how the final episode delved into the topic of euthanasia without really being about euthanasia. I also really liked the show’s version of heaven. If there actually is a good place after we die, I hope it’s the infinite playground described in the show. I think I might spend some time inhabiting some of the fictional worlds I’ve loved reading about and watching over the course of my life.

I love when a show ends well!

Did you have a moment that gave you the feels in the finale?

This entry was posted on Thursday, February 6th, 2020 at 7:27 pm and is filed under television and tagged with television. You can follow any responses to this entry through the RSS 2.0 feed.

2 Responses to “What Did You Think of the Good Place Finale?”