I love behavioral psychology, and there’s finally a TV show to support my fascination with fellow humans.

The show is 100 Humans, and it’s on Netflix now. It features a diverse case of 100 people who willingly participate in a series of studies about human behavior. It’s a small sample size, but it’s still a helpful microcosm to explore characteristics like attraction, age, gender, and bias.

For example, one of my favorite experiments so far involved matchmaking bias. Each participant was presented with 3 real-life couples, though the participant doesn’t know they’re couples. 3 men, 3 women. The participant can ask them any questions, then they must divide them into pairs (they think they’re testing their matchmaking skills). Nearly every participant paired each of the men with a woman, and none of the participants asked the people about their attraction preferences. If they had, they would have realized that only 1 of the couples was heterosexual. This is despite a number of the “100 human” participants being LGBT.

There are also fascinating experiments about assembling furniture (which age group can communicate and build the fastest), humor (are men or women funnier), and bias (are people more likely to target certain race when they feel threatened). I still have 4 more episodes to watch, and I’m eager to see the results.

100 Humans isn’t just entertaining and insightful; it also provides an array of excellent conversation topics. When Megan and I watch, we often pause to discuss what we think will happen, what impacted the results, and how we see ourselves in the show. I love that.

Have you seen this show? What was the most surprising result for you? 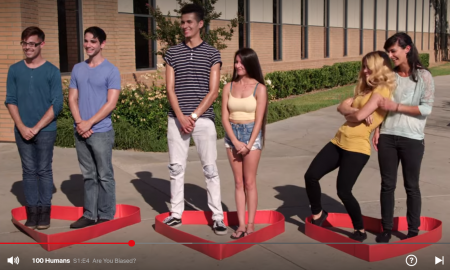 This entry was posted on Monday, March 23rd, 2020 at 6:22 pm and is filed under behavioral economics, television and tagged with television. You can follow any responses to this entry through the RSS 2.0 feed.

Leave a Reply to Cameron Art