My Crazy Idea for an Eventual Continuation of the NBA Season 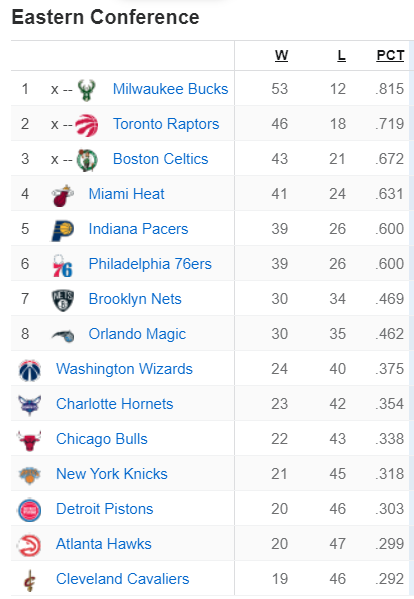 One of the biggest signals to me that the coronavirus is a big deal was when all professional sports (and March Madness) were put on hold last week. Leading by example makes a huge difference in times of trouble.

I follow certain sports as a casual fan, among them the NBA (basketball). I don’t know if or when the NBA season will resume, but if there are more games to be played in a few months, I have a crazy proposal for how to proceed.

The idea is that the regular season is over, and the NBA proceeds directly to the playoffs. However, instead of only 16 teams entering the playoffs, all 30 teams would join a seeded tournament (kind of like the NCAA basketball tournament). The structure would reward teams that already performed well while not excluding teams that potentially could have made the playoffs (only one team, the Golden State Warriors, was already mathematically eliminated from the playoffs).

For both 15-team conferences, the current #1 team would receive a first-round bye. The other 14 teams would be seeded based on their current rankings and matched with each other–for example, the Toronto Raptors would play the Cleveland Cavaliers.

The first round would feature instant elimination for any bottom seed that loses a single game; they would need to win 2 games to proceed. This again rewards the teams for playing the best during the regular season while still giving the underdogs a chance to prove that they deserve to be there.

The second round would proceed just like the normal NBA playoffs, as there would be the regular 8 teams per conference remaining (though if time is a constraint, this could be a normal best-of-3 round instead of best-of-5). And so on for the remaining rounds.

I think this would be incredibly exciting to watch. It would at least partially scratch the itch we’re missing from March Madness, and it would address the issue caused by several of the 8 seeds being up for grabs without prolonging the season (which was due to end in mid-April).

What do you think? How are you hoping the NBA, NHL, Champions League, Premier League, and other in-progress sports leagues will resume in 2020?

UPDATE: I’m amazed to say that the NBA adopted a strikingly similar idea to what I described above. From ESPN on June 4: “The play-in tournament will include the No. 8 and No. 9 teams — if the ninth seed finishes the regular season within four games of the eighth. In that case, the No. 9 seed would need to beat No. 8 seed twice to earn the playoff berth, while the No. 8 would need one win from the two potential games.”

This entry was posted on Monday, March 16th, 2020 at 5:48 pm and is filed under sports. You can follow any responses to this entry through the RSS 2.0 feed.