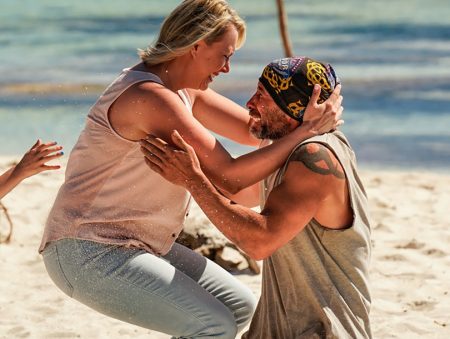 I’ve had a blast watching the 40th season of Survivor, one featuring 20 previous winners. This season has featured a few twists and new additions–including the fire tokens, which no one seems to want to spend–but last night’s episode featured a major departure from a Survivor tradition that I’ll discuss below (spoilers for the April 15 episode).

On Survivor, usually when they get down to around 7 or 8 people, the remaining players are each greeted by one of their loved ones (spouse, parent, sibling, etc). They hug for a few seconds, and then the survivors compete in a challenge to determine who earns the reward of spending a few hours with their loved ones. Typically this results in 4 survivors winning that extra time, and the others say goodbye.

I’ve seen this challenge many times, and while it’s a tearjerker of an episode, I’ve never thought of it as cruel (nor do I think it’s the producers’ intent to be cruel). But after watching last night’s episode–in which they tried something different–I can’t see this challenge any other way.

Last night, after all the hugs, Jeff Probst surprised everyone by saying that there was no challenge. Instead, the survivors simply spent a few hours with their loved ones. You could tell that it meant the world to everyone there. For a few minutes of viewing time, we simply watched fellow humans being extremely happy. It was a delight to experience.

Now that I’ve seen it, I hope Survivor doesn’t ever go back to the previous version. As I said, it now seems cruel in comparison–they fly a person all the way out to Fiji to see someone they truly love and who loves them back, and most of them just get a hug before they’re extracted from the beach. You’ve gone through all that effort, just as the survivors have gone through the effort of staying in the game for that long…just let them hang out for a few hours.

This entry was posted on Thursday, April 16th, 2020 at 5:58 pm and is filed under Survivor, television and tagged with television. You can follow any responses to this entry through the RSS 2.0 feed.