Have You Tried Craft Bread? 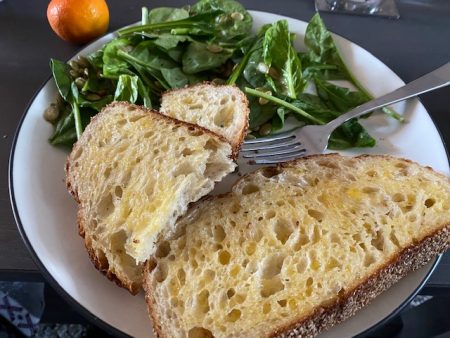 When I was growing up, my mom got really into making homemade bread. I think bread machines were kind of a “thing” for a while.

After a few years she decided that it would be easier to just buy bread from the grocery store, so most of the sandwiches I ate in high school were on pre-sliced whole grain bread (I think the brand is Branola?).

As an adult, I’ve bought almost all of my bread from grocery stores. That is, I haven’t sought out stand-alone bakeries–it’s easier and more cost-effective to just buy bread with the rest of my groceries.

But it appears that I’ve been missing out on some great bread.

This past weekend, we ordered pizza from Union Loafers again (this time WITH cheese). On a whim while placing the order, I added a few loaves of bread to my cart. The apocalypse has made my body want carbs more than normal.

I have to say, the bread is incredible. As you can see in the photo, it’s light and airy with a crust that’s covered in sesame seeds. It eats well toasted or untoasted, and it barely needs the touch of butter I apply to it.

It’s pretty much everything I’ve always wanted in life.

I’m not saying that all bread I eat from now on will be craft bread, but it’s hard to be excited about anything else. Fortunately, my grocery store sells some local craft bread–it’s not quite Union Loafers quality, but it will do. Otherwise, if Union Loafers starts a subscription delivery service that I could set up for once-a-week deliveries, I won’t be able to resist.

Have you tried craft bread? What did you think? What’s your favorite bakery?

This entry was posted on Thursday, May 7th, 2020 at 8:06 pm and is filed under food. You can follow any responses to this entry through the RSS 2.0 feed.

4 Responses to “Have You Tried Craft Bread?”