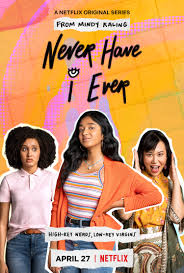 We recently finished watching the first season of “Never Have I Ever” on Netflix, a 10-episode half-hour show that I really enjoyed. It includes all of the great things about “To All the Boys I Loved Before,” but as a show instead of a movie.

However, there’s one aspect of the show that I’ve seen in a few other shows, books, and movies (most notably Harry Potter) that I’m really not a fan of: Friendships based on lying, bickering, and betrayal, to the point that the protagonist spends a significant amount of time simply not being friends with her friends.

Even if you haven’t seen this show, you’ve probably read or watched Harry Potter. At a certain point in the series, every book starts to follow a trend: Harry, Ron, and Hermione start off as great friends, but they soon split apart. They barely hang out or talk, and when they do, they often lie or act cruely to one another. Then at the end of the book they make up, reveal some information they could have shared months ago, and they proceed to save the day.

Can you think of a single friendship in your life that is anything like this?

I’ve had friendships that faded away and even a few that just went bad. I’ve also had friends with whom I’ve simply lost touch, and eventually we catch up. But I’ve never experienced or observed a friendship in which we’ve spent the majority of time being angry with each other.

Perhaps more importantly, even if such friendships occasionally happen, what is the point of displaying them in fiction? Basically, is Never Have I Ever a better show because the protagonist spends most of her time not getting along with her friends? It’s a very good show, but could it have been great?

I’d point to Brooklyn 99 and Parks and Rec for examples of how this can make a show awesome. They’re full of people being loyal and kind and saying “yes” to each other when they’re silly (and constructively helping their friends at the right time, as real friends do).

I understand that the first season of Never Have I Ever is largely about grief, so perhaps that’s a big reason for the contentious friendships. (I have no excuse for Harry Potter, despite my love of it). But I hope the second season evolves in those regards.

What do you think about all of this? Have you watched the show?

This entry was posted on Thursday, May 14th, 2020 at 7:00 pm and is filed under television and tagged with television. You can follow any responses to this entry through the RSS 2.0 feed.

One Response to ““Never Have I Ever” Had Friendships Like These”