What Would You Do as a Guest Judge on Top Chef? 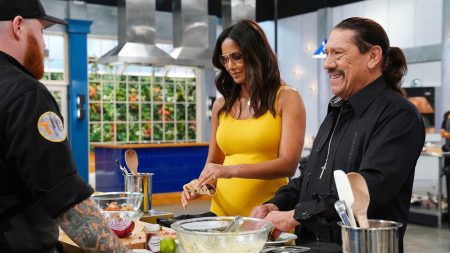 I love the cooking competition show Top Chef. Each season starts with 18-20 professional chefs who compete in a series of challenges to remain in the game.

In each episode, a guest judge presents the chefs with a “quickfire” challenge in which they have a short amount of time to make a specific type of dish. Along with Padma, the guest judge then tastes the dishes and helps to select a winner.

This season featured one of my favorite thematic challenges. The guest judge was actor Danny Trejo, who is forever linked to the machete as a weapon (I think he’s appeared in several films using it as a weapon, including the movie Machete). So the challenge he gave the chefs was to cook a taco using an actual machete as their only cutting instrument.

I love that! It made me wonder what type of challenge I would choose if I were ever a guest judge on Top Chef. My “thing” is tabletop games, so perhaps a game-related challenge? It could be something simple like “roll some dice and use the ingredients associated with the die roll” or maybe they need to cook with scythe? Viticulture could also integrate well into the challenge, as wine pairs with food.

Also, I’d like to think that I’d be the type of guest judge who would share something positive about every dish. Those are my favorite guest judges. There are others who have an uppity attitude and seem to instead find something wrong with each dish. Leave that to Padma–just have fun!

Last, quick note about how they handled the finale of Last Chance Kitchen this season (spoiler warning): Like Exile Island in Survivor, if you’re eliminated from Top Chef, you go compete in head-to-head challenges with other eliminated chefs. Normally, the last chef standing is inserted back in the game.

But this season, the last chef standing had to compete against remaining chefs to earn their spot back in the competition. I thought this was absolutely brilliant, as it makes their return feel deserved (or not, in case they lose the final cookoff). I would love for Survivor to do this: Let the exiles compete for 1 of them to return, but that person only gets to return if they can win a challenge against the players who haven’t been voted out. Perhaps the exile could even pick the type of competition–a balance challenge, a focus challenge, or a puzzle.

What challenge would you choose if you were a guest judge on Top Chef?

One Response to “What Would You Do as a Guest Judge on Top Chef?”