Have You Ever Participated in a Treasure Hunt? 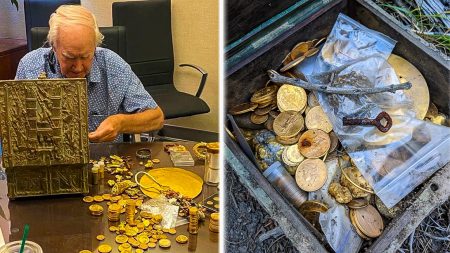 One of the most entertaining books I’ve read over the last 10 years was Ready Player One, largely because it’s a treasure hunt. A mysterious inventor creates a world, offers some clues to a huge prize, and broadcasts it to the world.

Ready Player One is fictional, but there are also some real-world treasure hunts. One of the most famous began in 2010, when author Forrest Fenn hid a treasure chest containing an estimated $1 million in gold and gems somewhere in the Rocky Mountains. He announced the treasure hunt in his autobiography, which contained a poem full of clues, saying that he wanted to “inspire people to explore nature and give hope to people affected by the Great Recession.”

I remember hearing about this years ago, and after the treasure wasn’t found right away, I wondered if anyone would ever find it. But sure enough, it was recently announced that someone–Fenn doesn’t know exactly who–did indeed locate the treasure, which appeared to be in good condition.

I love that Fenn did this, and I love that he designed the puzzle well enough that it wouldn’t take someone too long or too short to find it. You can’t really playtest a treasure hunt like you can a tabletop game, but Fenn managed to find that sweet spot.

This isn’t the first real-life treasure hunt, and I really hope it isn’t the last. The world needs more magic, in my opinion.

This entry was posted on Tuesday, June 23rd, 2020 at 5:49 pm and is filed under their brilliant ideas. You can follow any responses to this entry through the RSS 2.0 feed.

7 Responses to “Have You Ever Participated in a Treasure Hunt?”