Have You Watched Space Force?

I really enjoyed the first season of Steve Carell’s Netflix show, Space Force. It’s smart, funny, and topical. If you like The Office and/or Avenue 5, I highly recommend the show.

I’m leading off with that because some of the early reviews I saw about the show were mixed to negative. I almost didn’t even give it a try as a result, but that would have been a monumental mistake.

If you haven’t seen it, the show follows the commander of the new division of the US military, Space Force, after the president demands “boots on the moon” by 2024. It’s definitely a comedy, but it takes itself serious enough that it doesn’t verge into absurdist fiction–and it’s for that reasons that episodes like the Space Force vs Air Force wargame work, despite how ridiculous the participants look in their balloon-covered uniforms.

Steve Carell is great, but a number of other cast members are fantastic as well, perhaps most notably John Malkovich in a brilliant piece of casting. Phoebe from Friends is also there as Carell’s wife, and one of the most heartfelt conversations I’ve ever seen on television happen between the two of them late in the season.

I also really liked Carell’s speech a few episodes into the season about why it’s worth the money to spend oranges to astronauts. Oh, and the show demonstrates how a well-timed curse word can punctuate a scene or joke (and this is coming from someone who doesn’t curse).

I’m guessing Space Force isn’t for everyone, but if you want to see if it’s for you, give it a few episodes to see how you feel about it. Not that the first episode is bad, but pilot episodes aren’t always indicative of what a show actually is.

Have you watched Space Force? What was your favorite part of it? 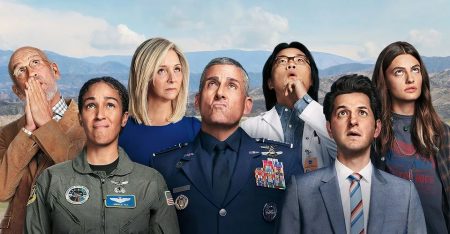 This entry was posted on Tuesday, June 30th, 2020 at 4:28 pm and is filed under television and tagged with television. You can follow any responses to this entry through the RSS 2.0 feed.

2 Responses to “Have You Watched Space Force?”