I’m Part of the Problem 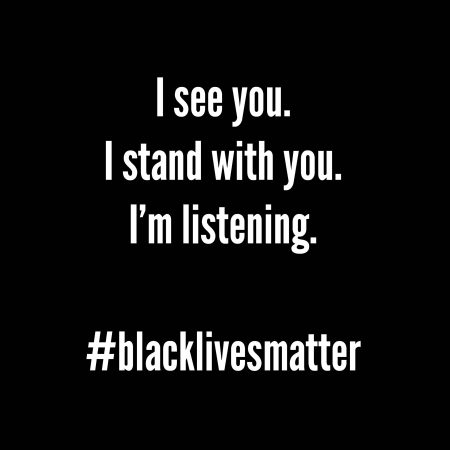 The original version of this post featured a story about something dumb, racist, and immature I said when I was 18. My intent in sharing this story was to show how I’m part of the problem of systemic racism (even in ways that are subconscious and deep into my past).

However, I’ve listened to those who have chosen to comment on this post and offer their insights and advice, and I don’t think it’s helping anyone for me to keep the anecdote here. So instead, I’m going to leave the core message.

I want to be clear up front that this–as in, the massive issues of inequality and injustice faced by black Americans today–is in no way about me. I truly do not intend to make this about me. My intent is to use my voice for good, and if I do so poorly, I take ownership of that. I’m trying to learn, I’m willing to listen, and I want to improve.

Long story short, when I was 18, I treated someone differently because of the color of their skin. It wasn’t intentional at all, but something subconscious resulted in a moment of unfortunate behavior.

I’d like to also share this excellent list of the many ways white people who believe in true equality can be an active part of the solution to systemic racism, a post I’ve been reading through and acting on (including donations to help peaceful protesters pay bail and to Reclaim the Block). My support won’t stop there, nor will my awareness of my weaknesses and blind spots.

Also, thank you to Dusty (via this episode of The Mill and a personal note he sent me) and Jimmy Fallon (specifically, this video) for inspiring me to say something, as I don’t think silence will result in progress. Last week I had a bad experience trying to offer help on a related Facebook thread* on which I felt like I shouldn’t have commented (I think their intentions were ultimately good, as we share the same goal. I ended up deleting my comment, which unfortunately removed some great resources in the same thread, which I regret. I think this list–the one I mentioned above–includes those resources and many, many more. Their comments made it clear that I’m part of the problem and that the first step is openly admitting that I’m part of the problem, and I agree, so those comments directly inspired me to write this post).

Let’s invite people to share their stories, their guilt, their questions, their hope, and their support rather than hush them. Let’s listen more and chastise less. Let’s inform each other, and let’s challenge strangers in the same tone that we challenge friends.

This is a safe place for you to share your story if you’d like. If not, that’s fine too–I appreciate the opportunity to share this with you.

*For those reading this, the comment I made was one where I expressed sympathy to a black member of the game industry who had some examples of terrible treatment at the hands of the Minnesota police. I also expressed helplessness, as I wanted to help, in my words, “stop a cop from pulling a gun on one of the best game designers in the world.” While I thought the thread was an open conversation, I learned that my comment put an emotional burden on the person. I’m sorry for that, and I apologized privately to the person.

For people in the game industry, I recommend this post. I also think this is a great article: For Our White Friends Desiring to Be Allies

This entry was posted on Wednesday, June 3rd, 2020 at 4:19 pm and is filed under personal and tagged with personal. You can follow any responses to this entry through the RSS 2.0 feed.

31 Responses to “I’m Part of the Problem”