Viticulture Pre-Orders and Lessons Learned from My Kickstarter Backers 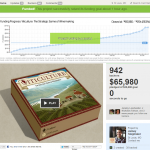 The Future of Group Gifts

I recently had several superb experiences with a web app called Shareagift that I want to share with you. Shareagift is a platform for purchasing group gifts. Say you decide that you want to buy a $2,000 grill as a wedding present for your friend, but you don’t have that kind of cash. Within a few […]

The Susan G. Komen Foundation Is Taking Over the World

Disclaimer: I have the utmost respect for this organization. Breast cancer, or cancer of any kind, is not a laughing matter, and I’m so impressed by the Komen Foundation’s ability to pervade into everyday American life the way it does today. I’ve never seen fundraising like this. Let’s just put it out there in the […]

Four Weddings and a Fundraising Event

I attended four weddings over the month of May—one on each of the last four consecutive weekends. Each one was unique and memorable. One was a Hindu wedding where the groom rode in on a horse. Two were Catholic—one of which had a 25-minute ceremony, the other a 105-minute ceremony. One was the first wedding […]

I spent the last three and a half days (Sunday-Wednesday) at a development conference in Austin (Texas—the subject of this blog is a line from the movie Road Trip that Caroline says whenever I say “Austin”). This was the 2008 Petrus Leadership Conference, which is hosted by a company that consults with Catholic campus churches […]