The Best Story of the Best Spaghetti Sauce Ever Made

Yesterday I wrote about going to the grocery story to buy spaghetti sauce in a jar.

Several people wrote to me, dismayed that I would dare to purchase such spaghetti sauce. The thing is, I make a pretty good spaghetti (red) sauce from scratch. What I was actually buying that day was an Alfredo sauce, which I hardly ever eat, but I needed it for Trader Joe’s lobster ravioli.

The year was 1999, and the sea was angry. My friends and I were holed up in a beach house on the shores of the Outer Banks in North Carolina. We had all just graduated, and it was beach week. It was guy’s night to cook.

We had several chefs among us. Max (his real name, to protect his anonymity), was the most natural of the bunch. Legend has it that Max was born with a ladle in one hand and a recipe for goulash in the other. Max’s parents–his father in particular–taught him to love the creation of food from day one. By the time Max turned 5, he was making pasta from scratch. At 9, he made a reduction so reduced that it disappeared into thin air and was later discovered on a llama farm in Peru. At 12, he caught a Chilean sea bass with his bare hands and broiled it on the spot using only a baseball cap and piece of aluminum foil. At 14, he opened a 4,000-sq ft restaurant to serve a single perfect bowl of soup to the President and then burned the place to the ground immediately afterwards. He was a genius in the kitchen.

So Max took the lead for guy’s night. We decided that because we were men (albeit skinny, sunburned men), we were going to make a meat salad. A cornucopia of meats. The main part of the meal would be spaghetti with fresh red sauce, and the meat would be mixed into the pasta as each of the guests (the women) saw fit. 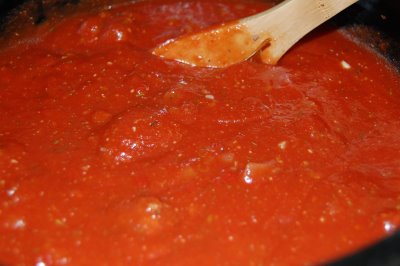 There were a few secrets to Max’s recipe for the sauce, only a few of which I can divulge here. One of them involved using whole canned tomatoes. Others included fresh garlic that was minced and sauteed, as well as diced basil and oregano.

Then came the labor. The sauce had to be stirred constantly for hours– “the longer, the better,” Max said. We took shifts, with Max walking into the room on occasion to taste the sauce and declare, “More basil!” He once caught me not stirring and he slapped me hard across the face. I slapped him back, and we stood there, respecting each other.

After 5 hours, Max declared the sauce edible, and we served it to the women. Several of them orgasmed immediately and had to be excused. Others barely made it through the meal, trembling with pleasure from every morsel. The sauce could not have been better.

I must admit that I cannot recreate the piece of art that Max did that day. I can only try to duplicate it, to paint by the numbers that he etched across my soul. Max, wherever you are–whether you’re training chefs in France or opening 6-star restaurants on Montego Bay (Max invented the 6th star)–thank you for the gifts you have imparted to me. (Oh, and it was good seeing you at the class reunion last fall.)

Do you have a recipe that could best Max’s? One that could catch the eye of Cleopatra or capture the smile of the Mona Lisa? Post it below.

This entry was posted on Wednesday, February 17th, 2010 at 11:46 pm and is filed under food. You can follow any responses to this entry through the RSS 2.0 feed.