Pet Peeve #66: When Tabloids Make It Look Like Two People Are in the Same Place

I’ve had this one on my list for a while, but I generally don’t get excited about grumbling about things, so I’ve been putting it off. But the time has come.

The subject line of this pet peeve is about tabloids. I’m sure you’ve seen this while waiting in line at the grocery store. A tabloid will have a blazing headline like, “Johnny Depp: “Not My Daughter!”, with a photo showing Johnny Depp glaring at Suri Cruise.

At a quick glance, it looks like Johnny Depp is in the same room as Suri Cruise, prompting you think, “Wow, they look really angry at each other!” But if you look closer, you’ll notice the slightest different in the backgrounds–they’re two completely separate, unrelated photos.

Tabloids have been doing this for years, and I’ve given them a free pass. Tabloids are sensationalist by nature. It’s what they do.

But the problem is that this technique has crossed over into more respectable forms of media, including my main source for sports news: ESPN.com.

The reason I originally made a note of this pet peeve was a few weeks ago when I saw this photo: 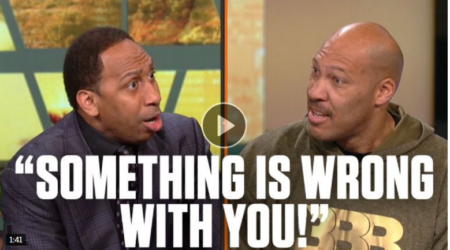 The photo depicts ESPN’s Stephen A. Smith staring down LaVar Ball (who is famous for all the wrong reasons, which I won’t go into here). At a quick glance, it kind of looks like they’re actually speaking face to face, right? But of course they’re not in the same room. They’re not even talking to each other.

To me, this is unnecessarily manipulative photojournalism. If Stephen A. Smith and LaVar Ball were indeed talking about each other, the conversation could still be depicted in a combined photo, but it could be edited in a way that doesn’t try to trick us into thinking they’re in the same room talking to each other. ESPN has gone out of their way to depict something that never happened.

Is it just me, or are you bothered by this too? Where have you seen it?

This entry was posted on Monday, April 24th, 2017 at 8:06 pm and is filed under pet peeve and tagged with pet peeve. You can follow any responses to this entry through the RSS 2.0 feed.

3 Responses to “Pet Peeve #66: When Tabloids Make It Look Like Two People Are in the Same Place”