Pet Peeve #67: When a Restaurant Changes the Recipe for a Dish You Love 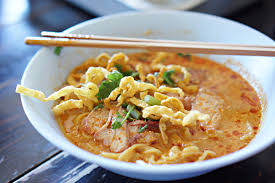 Okay, I want to start off by saying that this is an incredibly privileged article for me to write today, especially given the dire situations happening in Puerto Rico and Mexico right now. However, I’ve donated to both relief efforts, so I feel a little less guilty about writing this.

Today I had lunch at my favorite Thai restaurant in St. Louis. I wanted to order one of the best foods I’ve ever tasted, Khao Soi, but I begrudgingly chose another dish.

Why? Because the last two times I’ve been to this restaurant, it became clear that they had changed the recipe. It’s still delicious, but it’s missing the magic it once had.

I came home and had a few Trader Joe’s chocolate mints…and I realized they changed their recipe too! I’ve suspected it for a while, but I’m now positive that there’s something different about the mint.

The last example I can think of are McDonald’s fries. I have no memory of what their fries tasted like in the ’80s, but apparently in 1990 they changed their recipe, and the new flavor doesn’t come close to the original. There’s a great Malcolm Gladwell podcast about it here.

Have you ever experienced this? When has someone changed a recipe that was already perfect for you?

This entry was posted on Tuesday, September 26th, 2017 at 10:24 pm and is filed under pet peeve. You can follow any responses to this entry through the RSS 2.0 feed.

7 Responses to “Pet Peeve #67: When a Restaurant Changes the Recipe for a Dish You Love”