A Stranger in Y Gelli, Part 4

This is part 4 of a 6-part short story I wrote a while back. It’s written from the perspective of Bala Davies, a fictional woman living in the Welsh town of Y Gelli. Please read part 1, part 2, and part 3 first.

Also, special thanks to Renate for correcting some of the terms I’ve been using that apparently no one uses in Wales! They’re subtle changes, but I like that the story is more accurate now. 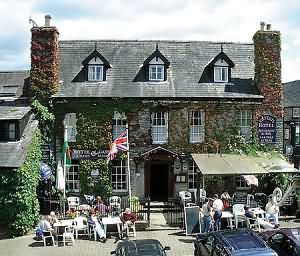 I had a fair number of female friends in the town. There was the tall Kate Amberly, and her good friend, Maggie Price. Elinor Evans, of course, but she knew everyone. I had tea with Kate Humphries once a week, and I was in a book club with Cara Evans and Kate Thomas, among others. And I often found myself in conversations with Rose Llewllyn at her store, Rose’s Books.

That’s not to say that I don’t know a number of men in Y Gelli. I might have a pint with the rugby team over at Three Tuns every now and then, or dish with Emyr James, the town barber, when business was slow. And sometimes I called Gilliam to try to get him to invite Kyffin and me over for dinner. But I didn’t really know any of these men. That’s the way of Y Gelli—women have their own world, and men have theirs.

So it’s fair to say that Nate became my first male friend in town. It soon became clear to me—and to Kyffin, much to his chagrin—that Nate was in no hurry to leave Y Gelli. He didn’t always come to the Reed (this was my doing—I told him that there were too many bookstores in town for him to limit himself to mine), but I saw him for lunch or tea or just a chat at least once a day. Sometimes he was talkative, sometimes not. That’s the way he is.

He asked me about Elsi, once. Something to the effect of, “Who was that girl?”

I snorted at him. “I thought you were here for the books, not the women.”

Perhaps he had sensed my reticence, because he agreed and never spoke of her again.

Late in the second week of Nate’s stay in Y Gelli, we were talking a walk along High Town when we passed a beggar in the square. Before I could stop him, Nate had extracted a quid from his wallet and placed it in the hollow book the scum was using to collect charity. Without looking up, the beggar, whose head was covered by tattered hood, said, “Thank ye, sir.”

I grabbed Nate’s arm and dragged him down the sidewalk. “What do you think you’re doing?” I hissed.

He was taken aback. “Um, giving money to the poor.”

“Even the poor can work.”

Nate shrugged. “We don’t know that. Maybe there’s something wrong with his legs or back.”

“I’m sure.” I rolled my eyes. “Just promise me you won’t give another penny to that beggar. Or any beggar in town. Those wankers are just mooching off people like you and giving hard-working people like me a bad name.”

I smiled, and a weight was lifted from my shoulders. I also liked that Nate had started calling soda “pop” and sausages “bangers.” Oh, and to my particular delight, he had ceased saying “Hay-on-Wye” and only used the proper name of the town. He’d be half Welsh by the time he left here.

The next day, I came back from tea with Kate Humphries to find my husband laughing it up with Nate in the back of the shop. I vacantly put my bag down on the desk and meandered past the last row of bookshelves.

Kyffin had pulled up a chair and was sitting in front of Nate. One leg crossed over the other, he slumped in his chair, speaking with such an air as though he was in front of a much larger audience. Nate was leaning forward, his eyes wide open in rapt attention. His face was red from laughing.

“And then—get this—halfway through the meal,” Kyffin was saying, chuckling at his own story, “halfway through he looks up from the pie and says, ‘I know exactly what you did to this, and it’s so good, I don’t even care!’”

Nate burst out laughing. “He didn’t!”

I walked up behind Kyffin and squeezed his shoulders tightly. “Indeed he did. He drank for free for the next week at any bar in town,” I said.

“You know this story?” Nate asked.

“I think everyone in town has heard that story. Half of them were there that night.” I cuffed Kyffin gently in the ear. “So what are you two boys doing, sharing pub stories in the middle of the day?”

Kyffin gestured at Nate. “I came down here to check the place for vagabonds while you were gone,” (an outright lie—my husband is more likely to pocket a few bills from the register than anyone else in Y Gelli), “and I found my mate here with no tea in his cup. We got to talking, and now he knows just about half the secrets in town.”

Kyffin looked up at me, his eyes wet with sincerity. “Why don’t we all have dinner sometime, just the three of us?”

I forced a smile. “Do you plan on mixing business with pleasure?”

Kyffin’s lower jaw shifted to one side, as if to escape from his unwavering smile. “Wouldn’t dream of it.”

“Well, you better get back to work then,” I said, pulling him up by a handful of his shirt. “Let’s leave your ‘mate’ to his reading.”

Nate tried to protest, but I was already leading Kyffin toward the staircase. When we were out of earshot, I hissed in my husband’s ear, “You found out that he’s rich, didn’t you?”

“What are you talking about?”

“You know exactly what I’m talking about. I swear, Kyffin Davies, if you so much as take a penny from my friend, I’ll—” I realized in that moment that I had nothing to take away from the man. Nothing that hadn’t already been taken away.

“I’ll think of something!” With that, I pushed him up the stairs. I stood there for a moment, waiting to catch my breath. My cheeks were damp with sweat, and my heart was pounding. I was infuriated that Kyffin was trying to take advantage of Nate. Of my friendship with Nate. This was my store, my place, and Kyffin had suddenly staked claim to part of it.

I gathered myself together and apologized to Nate for the interruption. He was good to say nothing about my husband. I’m sure Nate thought he was a right old chap, a great storyteller. I’ll admit it, Kyffin can charm the petals off a flower when he has a mind to do so. His act sure worked on me, back when it wasn’t an act. Now all he cares about is money. And he had learned that Nate had plenty.

I had a thought as I settled into my chair at the front of the store. Money wasn’t the only thing Kyffin had an eye for. Perhaps there was something I could take away from him. One thing he’d certainly be remiss to see go. A plan began to form in my head.

Ah Bala, you old hen, I tittered to myself. Always up to something.

This entry was posted on Wednesday, April 6th, 2016 at 11:17 pm and is filed under writing and tagged with writing. You can follow any responses to this entry through the RSS 2.0 feed.