The Delight of Falling Down 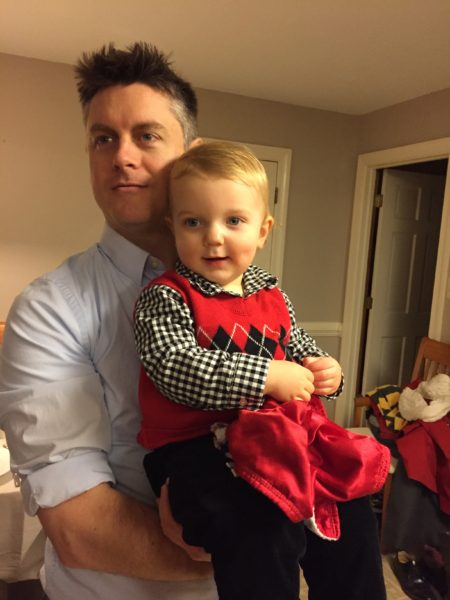 I’ve written here in the past about my niece (and will continue to write about her in the future), who is now coming up on 4. I haven’t mentioned much about my nephew, though, because he’s younger, and he hasn’t had the ability to interact much with me when I’ve seen him.

That all changed a few weeks ago when I was in Virginia for the holidays. James is about a year and half now, and he’s walking around, smiling, and laughing. He’s just on the cusp of saying a lot of words.

My dad had told me that James likes to fall down. I wasn’t quite sure what he meant by this until I saw it in action, but it was such a joy to experience.

Basically, if you’re sitting on the ground, James will walk over to you and then into you. It’s not aggressive; he just kind of falls into you, wiggles for a moment, then rolls away and keeps on going.

He’ll do the same thing with pillows. When he falls into them, he shrieks with laughter and delight.

I love that James delights in falling down. As an adult, it’s my inclination to not want to fall down, both literally and figuratively. Falling down hurts. It’s embarrassing.

But not to James. It’s one of his favorite things. It’s fun, and it’s helping him learn about his coordination.

And sure, sometimes he catches a sharp edge or he falls down when he doesn’t expect it, and he doesn’t enjoy that. But most of the time, there is purpose in the way he falls, and there’s joy in it.

I’m going to remember that the next time I fall down.

This entry was posted on Tuesday, January 3rd, 2017 at 7:27 pm and is filed under personal and tagged with personal. You can follow any responses to this entry through the RSS 2.0 feed.

3 Responses to “The Delight of Falling Down”