What Was the First Movie You Saw in the Theater? 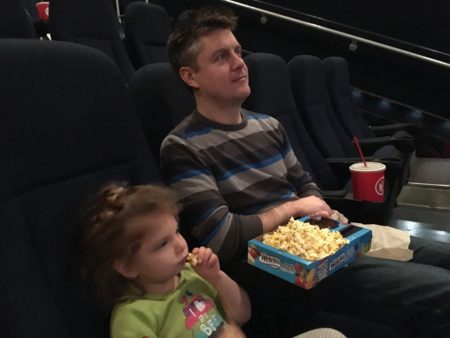 I’m 98% sure that the first movie I saw in a theater was The Jungle Book. I have a vague recollection of going to a second-run theater with my mom and sister. I’m sure I had no idea at the time that I would grow up to love movies as much as I do.

In December I was pondering what to get my niece for Christmas. She has plenty of stuff, so I thought about giving her an experience. That’s when the movie idea came to mind: Why not share my love of film with Anna and take her to her first movie in a theater?

I mentioned the idea to Anna a few days before Christmas by showing her the trailer for Moana on my phone. After it ended, her eyes didn’t move from the screen. “Again,” she said.

When the big day came, we were joined by her mom and dad. Anna was in awe of how big the screen was. I had warned her about this, but it’s tough to describe the world’s biggest television without seeing it in person.

For the first 45 minutes we were there, Anna kept asking, “Is this the movie?” It’s a reasonable question, as there were commercials, an advertisement for the theater, movie trailers, and a short film. Anna had no frame of reference, so to her, any of those could have been the movie.

She got really quiet when Moana took the screen. For a 3-year-old, she was very focused for the entire film–she divided her attention between the movie and her popcorn. At one point she wanted to sit on my lap for a while, and then she switched over to her mom’s lap. She ended the movie in her seat.

I was curious to see how she’d respond to the scarier parts of the movie, but she was unperturbed. When the movie ended, I asked her what it was about, and she had a hard time answering. It’s a lot to process. But she seemed to like it. Moana is a great movie with a fantastic lead character.

My hope is that she remembers the experience. My plan is to ask her every week when we Facetime for the next 10 years so she won’t forget Uncle Jamey took her to see her first movie in a theater, Moana.

Do you remember your first movie in a theater? If you have kids, what’s the first movie you took them to see?

This entry was posted on Wednesday, January 4th, 2017 at 10:00 pm and is filed under movies and tagged with movies. You can follow any responses to this entry through the RSS 2.0 feed.

12 Responses to “What Was the First Movie You Saw in the Theater?”