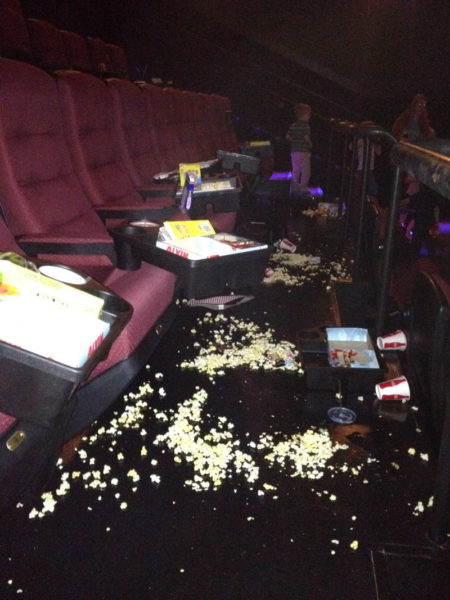 I worked in a movie theater for a summer right before college, and I had a blast. I love movies, I love seeing people get excited about movies, and I love popcorn. It was a good fit.

There’s one part of the job that no one at the theater enjoyed: Cleaning up a theater after a movie. It has to happen fast, there’s lots of trash, and occasionally you find evidence of sexual behavior that you just don’t want to think about.

Entertainment venues are one of the few places where it’s perfectly acceptable to simply dump trash wherever you want. Movie theaters, concert venues, sports stadiums…I’m sure there isn’t a single person out there who hasn’t left their cup in the cup holder or a crumpled napkin on the floor. We do it without thinking about it.

But when you do think about it, isn’t it a bit strange? Where else is it acceptable to toss your trash on the ground or leave it behind.?Would you do that at a friend’s house? In the park? On the street?

This blog series is about outward-facing life hacks–little things you can do that require very little effort, but they can make someone else’s job a lot easier. Because I’ve cleaned up trash in a movie theater, I know that that if I leave trash behind, someone has to pick it up. But it’s SUPER easy for me to carry my own trash to a trash can when I get up from my seat.

So I do. I’m sure I forget from time to time, but it’s become such a habit that I don’t have to think about it. And when I do think about it, it makes me happy to know that I made someone else’s job a little easier. And if you’re at a movie theater, it means that the people waiting for the next screening can get to their seats faster.

Is this something you do too?

This entry was posted on Monday, August 28th, 2017 at 7:38 pm and is filed under life lessons and tagged with outward-facing life hack. You can follow any responses to this entry through the RSS 2.0 feed.