The Question of Counter-Protesting 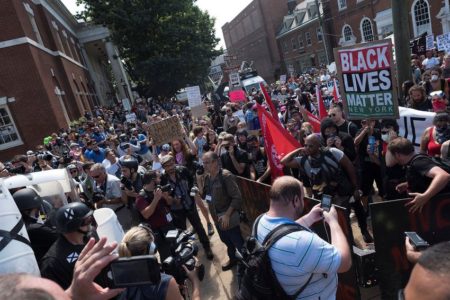 I had an interesting discussion with someone today about the appalling white supremacist rally in Charlottesville, Virginia. We talked about a number of different aspects of it, but one element remained debatable, and I’m curious to hear your thoughts. It’s about counter-protests.

At first, the idea was expressed that simply ignoring a rabble of angry, bigoted, white dudes will prevent them from getting what they want. They want a fight. They want a platform. So don’t give it to them.

Of course, that’s not what happened. There was a counter-protest to the rally, and the clash of the two groups was violent.

But then an opposing idea came up in the conversation: Don’t we have a responsibility to show each other that bigotry doesn’t belong in 2017 America. Even just on a micro-level, isn’t it good that the people of Charlottesville decided to say, “This isn’t what we believe in”?

I’m torn between the two options (to counter-rally or not to counter-rally). I don’t want to condone anything that would give white supremacists the coverage they seek, yet I also understand that remaining silent sends the wrong message too.

What do you think is the best way to handle a situation like this? I’m specifically talking about showing up at an appalling rally to counter-protest face-to-face (this isn’t a debate about whether or not we should speak out in opposition to bigotry–by nature, bigotry is wrong and should be condemned).

[UPDATE] If you are in favor of in-person counter-protesting, have you ever done it? Would you? In the initial response to this post on social media, a few people replied with hard-line answers saying that there’s really no question at all, that the only answer is that we must counter-protest and that silence is acceptance. So if that’s your point of view, I think it’s fair to ask you if you’ve shown up at a rally like this to counter-protest. If not, what does that say about you?

This entry was posted on Sunday, August 13th, 2017 at 10:30 pm and is filed under Uncategorized. You can follow any responses to this entry through the RSS 2.0 feed.

14 Responses to “The Question of Counter-Protesting”