The Opposite of Festivus

December 23 is the magical holiday of Festivus. I celebrated much more quietly than previous years.

Over the past 10 years I’ve hosted a big annual Festivus house party in which a monumental amount of alcohol is consumed while people write grievances on whiteboards around my condo.

This year, with me facing the prospect of a home office with lots of breakable things, I declared the end of Festivus. While I missed the party, a big part of me is relieved–it was great for 28-year-old Jamey, but life is very different from 33-year-old Jamey.

So tonight I simply watched an episode of Seinfeld I’ve never seen before (“The Parking Spot”). It’s always nice to stumble upon those “lost” episodes.

I was going to continue the tradition by at least writing a top 10 list of 2014 grievances, but then something happened that made me want to end the year on a different note (I’ll be on vacation for the next week).

I read this. And this related article.

Yaovi Mawuli is a high schooler in North Caroline. He immigrated to the US from Africa when he was younger, and he discovered a passion for limited-edition sneakers. A few years ago he started a business involving finding discount prices on the sneakers, waiting for their value to go up, then selling them on eBay (and eventually his own website).

Recently he posted this message on a sneaker-related Facebook group: 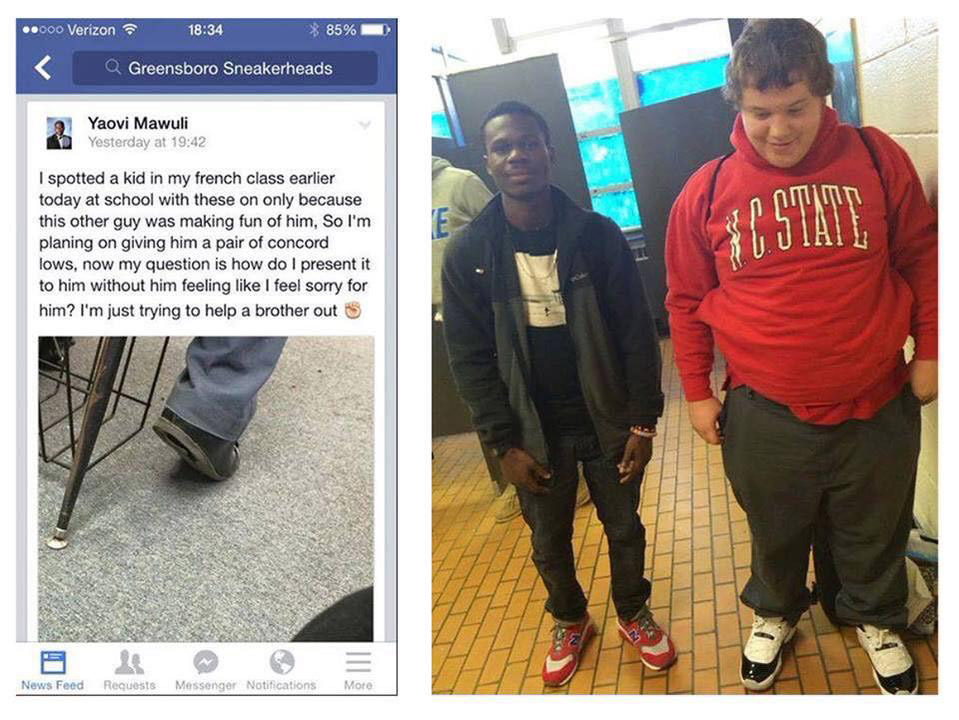 As you can see by the photo on the right, Mawuli found a way to give the shoes to his classmate.

This is awesome on so many levels. This kid comes from humble roots to start his own business. He recognizes an immediate need right in front of him and he does something about it, giving him a $200+ pair of shoes. And he does it in a way that lifts up his classmate instead of pitying him and putting him down.

I was really touched by this. It stopped me in my tracks. This is one impressive kid.

That’s why I’m not writing Festivus grievances tonight–how can I grieve about anything that happened in 2014 when there’s a story like this to share instead?

This entry was posted on Monday, December 22nd, 2014 at 8:22 pm and is filed under Festivus. You can follow any responses to this entry through the RSS 2.0 feed.