My Favorite Board Games of 2014

2014 has been a great year of gaming for me. I had a blast testing and refining my own game, Tuscany, and I hosted and/or attended several game nights almost every week throughout the year. I’ve really enjoyed connecting with people through games–some of my best memories from this past year happened at tables with friends.

Because I’m a publisher and designer, I rarely rate or rank other games (other than to speak highly of the ones I love). However, today I look back at my favorite games I played for the first time in 2014 (regardless of when they were release). In all honesty, Tuscany would absolutely make this list, but I’m going exclude it due to my heavy bias. Between Two Cities, our upcoming Kickstarter release, would also be on the list, but again, bias.

10. Coconuts (review here): Coconuts is the only “dexterity” game on my list, meaning a game that requires you to physically interact with it. In the case of Coconuts, that means using plastic monkey catapults to shoot rubber coconuts into cups. It’s an extremely simple game, but it is so much fun.

8. For Sale (review here): I think this is the first “filler” game I really came to love. It involves an auction in which you buy properties and then sell them. I honestly think this is one of the most clever, elegant game designs of any game. I would play it over and over if my group would let me.

7. Power Grid: This one very well could be #1, as it’s a brilliant game that’s actually quite easy to learn despite the depth it offers. However, it’s one of those games where you never really get to feel good about being clever, because as soon as you do something good, the game beats down on you so you won’t jump too far ahead. Still, awesome game.

6. Forbidden Desert: I think this is my favorite cooperative game at this point. While it’s an abstract game, I have a blast trying to solve the puzzle with friends, and we rarely experience the “quarterbacking” with it that other cooperative games allow.

5. Telestrations: This is pretty much the only party game I have any interest in playing, but it is fantastic. It’s nice to take a break from thinking really hard and just laugh (like the other day when I drew a perfectly good Loch Ness Monster and my friend wrote “sea worm”). The game is essentially the childhood game telephone, but with drawing instead of whispering. For adults, try using Cards Against Humanity cards instead of the Telestration words. 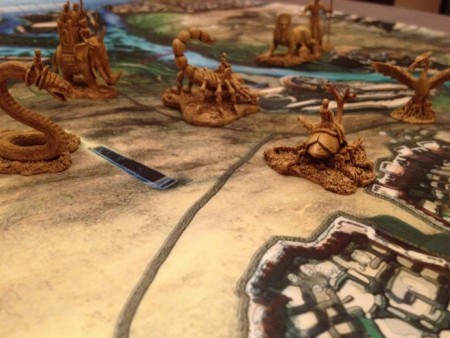 4. Sheriff of Nottingham (video here): This game has fluctuated on my top 10 list ever since I got it a few months ago. Sometimes after I play it, it’s an unabashed #1. Sometimes it’s barely #10. It kind of depends on the group and the mood. I just have a lot of fun negotiating with people in the context of this game.

3. Splendor (video here; review here): I have an ongoing debate with my friend Joe about Splendor being the best gateway game on the market. It’s just super easy to learn but offers plenty of interesting decisions for experienced gamers. I love engine-building in games, and this game is all about the engine.

2. Castles of Mad King Ludwig: This one kind of surprised me as I was putting together the list. It’s not a perfect game–players with “analysis paralysis” can really slow down the game–but the satisfaction and variation when you’re building your castle is unparalleled. It’s a game that allows you to feel clever from turn 1 to the final turn.

1. Kemet: I play very few games that involve direct conflict, but Kemet gets it right. From turn 1, Kemet is a game about attacking other players and holding vulnerable territory. Everyone is in the game from start to finish (unlike Risk), and I’ve never had a player feel like they were getting picked on, because attacking is simply part of the game and there really isn’t room to avoid it. Kemet also has a really clever upgrade system, an elegant battle system, and beautiful minis. I love this game.

You can see last year’s list here. What are a few of your favorite games you played for the first time in 2014?