I’ve been eating meat since day 1. It’s true–I emerged from the womb and immediately ordered a steak. Look it up on Wikipedia.

I found myself sitting at a table with a few friends at Small Batch, a restaurant near the theater where we would soon be watching Raiders of the Lost Ark in symphony. The menu had a variety of delicious sounding dishes…but something seemed off.

I couldn’t find the meat. 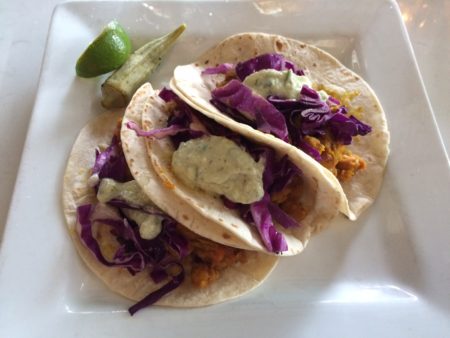 My heart rate rose as I desperately flipped through the menu, searching for any sign of animal flesh. There was page after page of every whiskey known to man, but not a single dish with meat.

I did what any sane person would do: I made a run for it.

But I was too late. The servers had seen the wild look in my eyes, and they were no stranger to this situation. They barred the doors and surrounded me. I put up a fight, taking down several of them, but there was only one of me and dozens of them. They tied me to the chair with green onions and left me to die.

My friends started monologing, revealing the elaborate plot they had devised to lure me to the restaurant. They had been planning this for years, carefully planting a garden of lies, manipulations, and red herrings. Plant-based red herrings.

When the food arrived, I clamped my jaw shut, buying time. Little did my friends know that I always carry a grilled pork belly in my back pocket. I was slowly but surely wiggling free of my restraints, and soon I would dine on swine.

‘Twas not to be. Without warning, the server ripped my mouth open and shoved inside a spicy chickpea taco with raita sauce, red cabbage, and pickled cucumber. Like any good waiter, they had duct tape on hand, and within a millisecond my mouth was taped shut.

I had no choice but to chew.

Then something remarkable happened. I realized…I realized that I liked it. Yes, there was no meat, and I knew I would starve to death mid-flatulence within the hour. But the taco was delicious. It wasn’t trying to be meat. It was its own thing. And it was good.

I gestured for the server to remove the duct tape, and I took another bite of the taco. The raita sauce was a beautiful complement to the spicy chickpeas and the crunchy cabbage. Even the soft tortilla shell was perfect.

With grace and poise that finished my meal, the pork belly in my pocket long forgotten. I continued on to the theater without stopping for fried chicken, and I even went to bed that night without a single bite of rib roast.

Look, I don’t like to use the words “hero,” “saint,” or “legend.” Those are your words, not mine. I’m just a normal guy who single-handedly saved the environment by eating a vegetarian meal.

I’m Jamey Stegmaier, and this is my true tale of survival.

For other true tales of survival, scroll to the bottom of this page.

This entry was posted on Monday, March 20th, 2017 at 10:19 pm and is filed under Survivor and tagged with survival. You can follow any responses to this entry through the RSS 2.0 feed.

12 Responses to “I Survived a Vegetarian Meal: A Survivor’s True Tale of Survival Against All Odds”