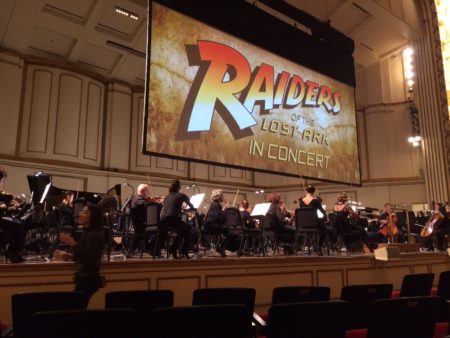 On Friday I had the great pleasure of watching Raiders of the Lost Ark on the big screen, with the music provided by the St. Louis Symphony.

I’m not a musician, so while I enjoy the impact music has on movies, I’m usually not nearly as tuned into that aspect of a film as I am the acting, story, and direction. That’s why I love attending these live performances–it’s an in-my-face reminder of the sheer talent that goes into creating the music.

There were moments during the film where I found myself searching to see how, exactly, the sound I was hearing was being created. Sometimes the search was in vain, but it was much easier to do with the symphony there.

I also learned something new: There were several scenes in the movie where there’s no music at all. Apparently, as a musician friend pointed out, there probably is a little bit of music during those parts of the movie, but the musicians need breaks from time to time.

Also, I was reminded of how good Raiders of the Lost Ark is. It reminds me a bit of Star Wars: The Empire Strikes back in that it’s essentially an extended chase, a format that seems to work really well on the big screen. Both of those movies were written by Lawrence Kasdan.

Have you ever watched a movie in concert? If not, which film would you like to experience in this way? I’d love to see Star Wars like this, and, taking it another direction, maybe some movies with classic soundtracks like Forrest Gump and Almost Famous.

This entry was posted on Sunday, March 19th, 2017 at 8:57 pm and is filed under movies, St. Louis and tagged with St. Louis. You can follow any responses to this entry through the RSS 2.0 feed.

9 Responses to “Have You Watched a Movie in Concert?”