Is This Real Life? 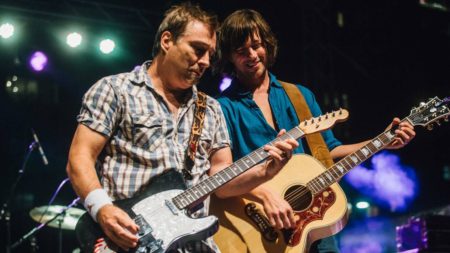 Ken is on the left.

I had something happen to me yesterday–something awesome–that made me ask, “Is this real life?”

In the middle of the afternoon, I got a message from someone named Ken. He said he’s a fan of my games, and he wanted to say hi. It was really nice to hear this.

Then the message got really cool.

Ken said that he’s in a band called the Old 97’s. He had heard that I live in St. Louis, and his band was playing in St. Louis that night, so he asked if I wanted tickets to the show.

It just so happens that a friend introduced me to the Old 97’s over a decade ago. Even if you’re not a fan, you may have heard a few of their songs, like Question and Timebomb. They had a scene in the movie The Break Up. They’re not the Beatles, but they’re legitimate rock stars.

Let’s process that for a second: A rock star likes my games and asked me if I wanted to attend their concert.

I’m not a spontaneous person, but I did not want to take something like that for granted, so of course I accepted. My friend Katy agreed to go with me on short notice.

When we arrived at Delmar Hall, Ken was hanging out by the side of the building. He called us over, and we proceeded to chat about games, music, and movies for a good 20 minutes. He said that he’s been playing games for years, as he has tons of free time when he’s not touring.

Then, before I even thought to take a photo, he had to take the stage. Katy and I went to the box office to get our reserved tickets, and 10 minutes later, the guy we were hanging out with was up on stage playing bass guitar for a packed crowd.

I’m still kind of in awe about the whole thing. Have you ever had something like this happen? Were you cool about it? I tried my best to stay cool, but it was very difficult.

This entry was posted on Wednesday, May 17th, 2017 at 8:38 pm and is filed under personal and tagged with personal. You can follow any responses to this entry through the RSS 2.0 feed.

4 Responses to “Is This Real Life?”