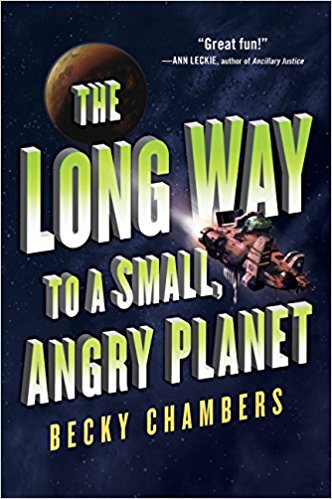 John Scalzi is one of my favorite sci-fi authors. He has the remarkable ability to introduce a new alien race and describe–within just a few pages of plot, not exposition–a huge amount of detail regarding what makes that race unique, special, and interesting.

Becky Chambers, author of The Long Way to a Small, Angry Planet, accomplishes this lofty goal and takes it a step further: She makes you care about the aliens you meet.

Well, most of them. Some are just rude.

I’m in awe of how good this book is. After it was recommended to me, I took one look at the cover and, yes, I judged it. There’s nothing wrong with the cover, but for some reason it indicated that the book would be silly. That it wasn’t taking itself seriously. I like serious sci-fi: The Expanse, Seveneves, Hyperion, etc.

But I was wrong about it being silly. It’s fun, but it’s not silly. The science, themes, and relationships have a huge amount of depth to them. But the characters–primarily crew members of a ship called the Wayfarer–have fun at all the right times (and sometimes the wrong times).

One of the wonders of this book is that the plot moves forward, but it’s far from the most important part of the book. It’s not a series of cliffhangers. Rather, it’s heavily character driven. This works because the characters are likable, interesting, nuanced, and, as I mentioned early, often not human.

It’s not the type of book that I could ruin with spoilers in the traditional sense, but if you’re intrigued, I’d highly recommend that you stop reading this blog entry now. But if you want a little taste of the types of aliens you get to know, here’s an example you’ll learn about early in the book.

Earlier this week, I posted an article about interstellar travel. The Wayfarer is a special type of ship that punches holes in space-time to create vast highways across the universe. To accomplish this, they need to be able to view space-time in a way that humans and even the most AI can’t…but one of the crew members, an alien named Ohan, is able to do that thanks to a parasite that lives inside his brain. His alien race reveres the parasite to the point that once it took hold of his brain, he started referring to himself as “they” instead of “him.” Ohan is referred to as a plural entity throughout the book.

That’s really just the smallest taste of the creativity Chambers exudes in this book. I highly, highly recommend it, and I’d love to know what you think if you try it.

This entry was posted on Wednesday, September 13th, 2017 at 11:00 pm and is filed under books and tagged with books. You can follow any responses to this entry through the RSS 2.0 feed.