A Quick PSA About Cat Urination 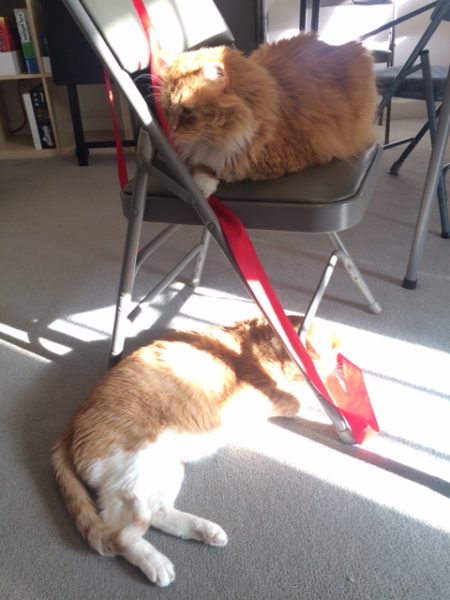 I didn’t plan to write about this, but it occurred to me today that my cat is still alive today because a friend had once told me something about her cat. I figured if this could save someone else’s cat too, it’s worth writing about.

On Wednesday, Walter hopped out of his litter box, made an odd sound, and immediately started to groom his crotch. Walter frequently grooms himself–including that area–but something seemed a little odd about his behavior, as he seemed perturbed. I thought maybe he had some poo residue stuck to his fur, so I took a quick look and was surprised to see something I’d never seen before: a little cat penis, out in the open.

It was weird, but I didn’t think much of it until a few hours later when Walter used the litter box again. This time when he got out, something was definitely wrong. There was no pee in the litter box, and Walter was moaning and hissing (he never hisses). He stumbled over to the bed and again began to groom his crotch. I tried to calm him down by petting his head, but he continued to whine. He was clearly in pain.

That’s when I recalled that a friend’s male cat had issues urinating a few years ago. When my friend took him to the vet, they discovered crystals in his bladder that were blocking him, and they did such damage to his internal organs that some of them had to be removed (fortunately the cat is okay now).

So I decided not to take any chances, and I took Walter to animal urgent care. Sure enough, they found that his bladder was blocked and that there were tons of little crystals in his urine. Fortunately, the vet was able to assist Walter in relieving himself without resorting to surgery.

He did, however, need to spend the night at the vet. They put in a catheter and an IV, and they managed to fully flush out his system. He was discharged to me the next night with good news about his internal organs (no permanent damage), some medicine that he’s very good at not swallowing, and a special diet for the rest of his life. Oh, and he has some cute (and sad) shaved ankles: 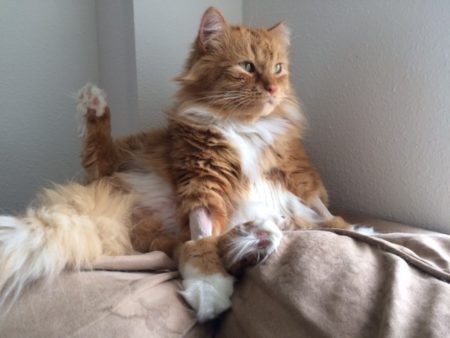 I’m lucky that I caught this in time, and I wish I had caught it earlier in the morning before it got really painful for Walter. Hopefully this will never happen to your cat, but in case it does, now you know some signs to look out for.

Do you have any stories about your pets that might help to save another pet’s life? Feel free to share in the comments!

This entry was posted on Sunday, October 29th, 2017 at 10:14 pm and is filed under personal and tagged with cats. You can follow any responses to this entry through the RSS 2.0 feed.

13 Responses to “A Quick PSA About Cat Urination”